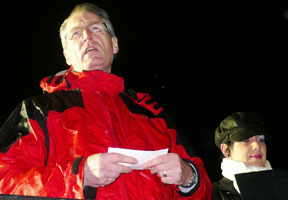 THE 20th annual commemoration of Volunteers Brendan Burns and Brendan Moley was held in South Armagh on Friday, 29 February.
Despite the inclement weather, some 2,000 people attended the candle-lit procession which commenced at The Kabin in Creggan and proceeded to the Two Brendans Memorial.
The main speaker at the event, Sinn Féin’s Gerry Kelly, delivered a very poignant and personal reflection of his relationship with the two IRA Volunteers.
Welcoming everyone to the event, especially members of the Burns and Moley families, Kelly told the large crowd present that the vigil and weekend activities organised by the local Brendan Burns/Brendan Moley Sinn Féin Cumann are a celebration of the lives and dedication and commitment of two sons of South Armagh to the goal of Irish freedom and independence.
“The two IRA Volunteers we remember tonight were ordinary men who, with thousands of others, saw injustice and struck for freedom. They were prepared to put their lives on the line in pursuit of that noble cause.
“The two Brendans were killed in an explosion 20 years to this day, on 29 February 1988, close to where this monument stands. British soldiers launched a full-scale attack on the funerals and several mourners were injured, some seriously. The British Government at that time chose a policy of attacks on republican funerals as a way of defeating resistance to British rule in Ireland. This was very evident in South Armagh that day and was to be repeated with tragic consequences within weeks in Belfast, with the attacks on the funeral of those killed in Gibraltar and on the funeral of Caoimhín Mac Brádaigh, who was killed in Milltown Cemetery at the funerals of the Gibraltar Three.”
Kelly said that the deaths of Brendan Moley and Brendan Burns were a great loss to their families and to the republican struggle.
“Their fame spread far and wide. Mairéad Farrell was deeply upset on hearing the news of their deaths. She, of course, was executed in Gibraltar by the SAS on 8 March, only a few days later.
“But the courage and reputation of the two Brendans reached out after the untimely loss. Young men and women came forward in their droves to replace these two brave men. Their resourcefulness, determination and courage is still an inspiration to republicans today in our struggle for national independence.”
He told those members of the Burns and Moley families present that republicans and nationalists hold the families of the republican dead in great esteem.
“It is because we are in your debt; it is because we are proud of you,” he said.
Gerry Kelly concluded by urging everyone to take courage from the sacrifice of ‘The Two Brendans’.
“We take courage from their sacrifice and the sacrifice of all our fallen comrades and we rededicate ourselves to the continuation of the struggle until we achieve our objective of a free, united Ireland, an Ireland we can all be proud of, an Ireland worthy of the sacrifice of so many of our people, an Ireland of equals.”
A new mural dedicated to the two men was unveiled on the night. Proceedings were chaired by local Sinn Féin activist Elena Martin, who thanked all for helping with ensuring that the 20th anniversary of the death of Volunteers Brendan Burns and Brendan Moley was a fitting tribute to our fallen soldiers.

IRA VOLUNTEERS Brendan Moley and Brendan Burns died in tragic circumstances on Monday, 29 February 1988, when a bomb, which was being transported for an attack on a British military installation, prematurely exploded.
Brendan Moley had been involved in some of the most daring IRA attacks throughout the South Armagh border area. During the daring escape of 38 republican prisoners from the H-Blocks of Long Kesh, in September 1983, it was Volunteer Moley’s familiarity with the South Armagh countryside which led many escapees to safe houses and ultimate safety.
Like his comrade and friend, Volunteer Brendan Moley, Brendan Burns had by the time of his death already become part of South Armagh’s history, having been involved in a series of well-planned IRA attacks on British military installations and personnel.
For six days after the tragic deaths of Moley and Burns the families of the two men suffered further at the hands of the RUC which sowed confusion around the location of the Volunteers’ remains. The release of their bodies was delayed. When the funerals did take place, mourners were subject to an unprecedented level of brutality from the RUC and British Army.
The funerals of the two Volunteers was the occasion of one of the biggest military saturation operations witnessed at any funeral during the course of the war in the Six Counties. Almost 2,000 RUC men and British soldiers in full riot gear and with Alsatian dogs surrounded Brendan Burns’s funeral corteges. During the funeral in Crossmaglen, mourners were viciously attacked by the RUC.