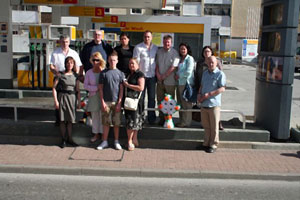 Tribute to IRA Volunteers on the Rock

WHEN IRA Volunteers Mairéad Farrell, Dan McCann and Seán Savage went to the Rock of Gibraltar in March 1988 they were there to launch an operation against the British crown forces. The British knew the Volunteers’ plans and ambushed them. SAS death squads gunned down the trio, who they knew to be unarmed.
The British Government, under the leadership of Margaret Thatcher, gloated over the deaths of the Volunteers and portrayed the SAS operation as a devastating blow against the IRA.
In life these three brave young Irish people resisted British rule in Ireland. They died resisting British rule and were defiant to the end.
Last Sunday, 2 March, representatives of the Farrell, McCann and Savage families went onto the Rock of Gibraltar and held a short but dignified commemoration in memory of the Volunteers.
It was a sombre commemoration yet it was under-scored by the same spirit of resistance that has carried Irish republicans through the darkest days of the war that waged in the Six Counties throughout the past four decades. Gibraltar, after all, is a British military garrison – it is an area of territory stolen from the Spanish and held through force of arms. It holds strategic military significance for the British and those who live on Gibraltar pride themselves on their Britishness and defend that Britishness as zealously as do Six-County unionists.
So as the families, accompanied by a number of other republicans, entered Gibraltar on Sunday last to carry out their act of remembrance, they were doing so knowing that there was the chance of confrontation with Gibraltarian loyalists. In the end, however, the ceremony was completed safely.
The local people who gathered around to watch what was going on seemed to do so out of curiosity rather than hostility, which meant that the families had time to reflect on their loved ones. The whole group was therefore able to focus on the homage they were paying to their relatives, friends and comrades.
The commemoration was a simple yet highly significant event made all the more important as it was the first time that the families had made the journey to Gibraltar for a commemoration.
In the past, members of the Volunteers’ families and other republicans from across Ireland have travelled to the territory and paid tribute to the Gibraltar dead but Sunday’s ceremony brought the families and friends of the dead together in a unique display of solidarity and support for each other as they approach the 20th anniversary of the executions.
The group arrived on Gibraltar as the clock ticked around to twenty minutes to four – the time when the SAS sprung their ambush and shot Mairéad and Dan in front of the Shell garage on Winston Churchill Avenue. Seán Savage, who was following behind his comrades, tried to escape his executioners, only to be caught in a hail of bullets under a magnificent beech tree at Smith Dorrien Avenue.
Sunday’s group began their commemoration by tying a tricoloured Celtic cross-shaped wreath to the tree under which Seán Savage was slaughtered. Over 29 wounds were counted on his dead body. Witnesses recounted to his inquest how his killers stood over his prone corpse, pumping bullet after bullet into him.
Seán’s sister, Mary, and nephew, Jude, comforted each other as the group stood in silent tribute. As well as the wreath, Mary left a small crucifix that her father wanted placed on the spot – that he may never see – where his son’s life was so brutally ended.
The local people who stopped to watch didn’t seem to know or care what the group was involved in which allowed the families – especially the Savage family – to honour Seán peacefully.
From there, the group moved to Winston Churchill Avenue and placed wreaths on the railings in front of the filling station where Mairéad and Dan died. Martin McCann, Dan’s brother, and Martin’s daughter, Danielle, placed one wreath while Niall Farrell, Mairéad’s brother, with the help of Martin McCann, tied a second wreath.
When the wreaths were in place, former Sinn Féin councillor Joe Austin addressed the little group of republicans gathered in front of the garage. At this point, people were feeling the sadness of the occasion as it weighed heavily on them. Austin’s words reflected that sadness and were all the more poignant as it was Joe who travelled from Ireland after the killings as the families’ representative and brought the bodies home to Ireland.
Joe, reflecting on the characters of the dead Volunteers, said it is important to remember how the three lived as well as how they died. He spoke with pride and emotion about people he knew and made it clear that republican icons like the Gibraltar Three were ordinary people with talents that they used in the struggle to free their country but that they were still sons and daughters, brothers, sisters and friends. “We shouldn’t forget their human qualities,” he said.
As Joe finished his short address and the group moved to their vehicles, a van carrying a number of Gibraltarian police officers pulled up in the forecourt of the filling station. Clearly they had the ceremony under surveillance but as the group drove off the police took a different route and left people with their memories and reflections of an occasion that republicans will recognise as an act of defiance and resistance.
It was an event that reinforced the truth of Pearse’s oration at the graveside of O’Donovan Rossa when he said: “The fools, the fools, the fools, they have left us our Fenian dead and while Ireland holds these graves, Ireland unfree shall never be at peace.”