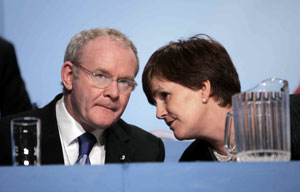 Education is key to equality

THE Education debate was made up of 11 motions, all of which were passed. Among these were an end to segregated education, quick access of all students to educational psychologists, the introduction of an all-Ireland school leaving exam to replace A-Levels and Leaving Certificates, an all-Ireland university entrance system, the removal of top-up fees in the Six Counties, every new Gaelscoileanna be built on independent sites, life skills and life choices to be taught in schools, and the introduction of drug awareness classes to all schools.
In a direct attack on the class structure inherent in the Six-County education system, Northern Education Minister Caitríona Ruane told delegates that Sinn Féin will face down any opposition from those who wish to deny equality of access and opportunity to children’s education.
In the future, children starting post-primary schools will do so at the age of 14, under an area-based plan. The criteria for the plan will mostly cover family, community and geographical concerns. Parents and teachers, along with students themselves, will choose their educational pathways as is the practice in the South. This will replace the 11-plus with its inherent inequality, which saw almost half the student population leaving school last year without effective passes in English and Maths.
Mickey Brady MLA (Newry/Armagh) congratulated Caitríona Ruane on the abolition of the “selective” 11-plus, describing the implementation of a non-selective system as “power in action” and denounced the system that failed 12,000 children in the Six Counties each year.
He also called on 26-County Education Minister Mary Hanafin to stop her negative interference in “total early immersion education” as practised by Gaelscoileanna. He pointed out that both issues strike at the heart of the national debate on education. There are positive changes being delivered under successive Sinn Féin ministers in the Six Counties but a destructive attack on the education system in the south by Fianna Fáil, he said.
Senator Pearse Doherty also highlighted this neglect with a blistering attack on the lack of funding for primary schools in the South. The popular senator also pointed out that schools in the South have the second-highest class sizes in Europe, despite years of campaigning by teachers, parents and communities. He said that an educational apartheid now exists in the with only one in five students from poorer backgrounds progressing into third-level education.

SCHOOL PSYCHOLOGISTS
The promise of 200 psychologists that the Government made to schools almost a decade ago has been utterly reneged upon, Dublin City Councillor Críona Ní Dhálaigh told the Ard Fheis. She spoke of the service being subsidised by charities and parents, with St Vincent de Paul funding over 1,000 psychological assessments in Dublin’s inner city alone. The rising number of child suicides has exposed the neglect in services as schools in deprived areas are chronically under-serviced with assessments being based on a child’s postal address rather than its need or rights.
Bray Councillor John Brady reiterated the responsibilities of the state to cherish all of the children equally, as stated in the 1916 Proclamation.  John also called for an expansion of the National Psychological Service agency to all schools, regardless of location, and told of the O’Cuanachain family from Arklow now facing a possible legal bill of  €2 million having failed to compel the Government to carry out its responsibility to children.