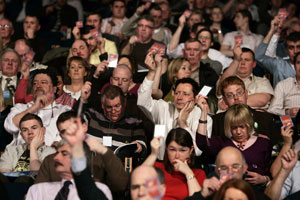 SINN FÉIN Dáil leader and Cavan/Monaghan TD Caoimhghín Ó Caoláin gave the opening address at the party’s 2008 Ard Fheis in Dublin’s RDS.
He said the party has brought about major political change through involvement in the Executive in the North. He urged people to reject the Lisbon Treaty in the forthcoming referendum.
“Since we last assembled for our Ard Fheis, politics have been transformed in a profound way by the re- establishment, at long last, of the political institutions of the Good Friday Agreement.
“In the Assembly elections Sinn Féin built and consolidated its support, winning 28 seats. The resulting formation of a power-sharing administration involving Sinn Féin and the largest party of unionism, the DUP, has been a momentous event and a massive undertaking for this party.”
He said the Sinn Féin ministers in the Executive are at the forefront of a new era in Irish politics.
“Sinn Féin nationally must ensure that the potential of this new political dispensation is fully realised and that we help to deliver real and tangible benefits for all the people.”
Acknowledging the people of North Kerry, Louth, Dublin South-Central and Cavan/Monaghan who renewed the mandates of TDs Martin Ferris, Arthur Morgan, Aengus Ó Snodaigh and himself in the 26-County general election, Ó Caoláin also welcomed Sinn Féin’s first senator, Pearse Doherty.
He said the general election was a difficult one for the party and that the Dublin South-West constituency was poorer for the absence from the Dáil of Seán Crowe. “But I want the Ard Fheis to be clear about one thing – Seán hasn’t gone away, you know.”
The election was followed by a period of intense analysis, debate, consultation and decision-making on the way forward, he said, adding that he believes Sinn Féin has come out of the post-election period “more focused and more determined to build Sinn Féin as the real alternative in every community and every constituency throughout the 26 Counties”. He continued:
“We have a united party leadership – not a Northern leadership, not a Southern leadership but a national leadership for a national party with national aims and objectives. And you, the delegates, elect that leadership and you are the republican leaders in your communities.”

NO CONFIDENCE IN FF/PD/GREENS
Ó Caoláin said that since the resumption of the Dáil there have been several votes of no confidence in the Coalition Government.
“If there was no tribunal, no funny money in St Luke’s and no ‘political donations for personal use’ we would still be voting no confidence in this Taoiseach and this government.
“Less than nine months in office and already they have broken key pre-election commitments. They are presiding over health cutbacks and massive shortfalls in education funding. Their totally market-driven approach to housing has come unstuck with many families in severe mortgage difficulties. They have failed to provide proper policing and improved community safety. They have neglected workers’ rights while rewarding anti-union employers. And now they ask the people to trust them and take their word that the Lisbon Treaty should be supported because they are our betters and they know best.”
Sinn Féin will campaign for Irish sovereignty and neutrality, against the Lisbon Treaty, he said.
“At this Ard Fheis we signal our intent to defeat the Lisbon Treaty.
“We will go on from that referendum to build a stronger Sinn Féin presence in every constituency by working closely with communities, presenting people with our sound and radical policies and providing effective leadership. We must use this Ard Fheis as a springboard for our local government election campaign in the 26 Counties next year and for the European elections. These are but milestones on the road to our ultimate goal of Irish unity and independence.”