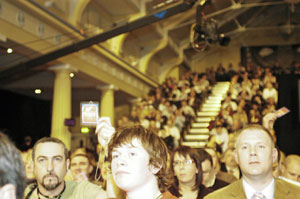 IT HAD to happen one day, I know, but though you think you’ll be ready, you never are. And when you have built something up in your mind, the reality is never quite the same when fate springs on you. So, last Sunday, while window shopping in one of Dublin’s over-priced and over-stocked shopping quarters in a post-Ard Fheis haze, this reporter was blind-sided by the acquaintance who wanted to talk about the tax debate at the previous day’s conference.
My interrogator hadn’t been there. In fact, he probably only gets to the RDS for the Ideal Homes exhibition or the Horse Show but he had heard there was “hot and heavy sparring” about Sinn Féin’s future tax and public finance strategy. How could he possibly know of these events, I quizzed him, and the half dozen or so other people who dared to broach the subject with me so far this week?
The answers all struck a common chord. After years of successful under-the-radar secret policy debates, Sinn Féin has been rumbled by deep undercover journalists in RTÉ, TV3, Newstalk and even The Irish Times.
These collective media active service units, just a mere 13-plus years after the 1994 cessation and nearly three years after the IRA putting weapons beyond use, nine months after going into government in the Assembly for the third (or is it the fourth?) time, have rumbled that Sinn Féin is a political party with policies on a myriad range of subjects.
Those cunning scribes have finally emerged from under the small mountains of Sinn Féin press releases, outlining the most mundane of policy positions with which they are blanketed annually at ard fheiseanna, and have proclaimed that Sinn Féin is a strange and rare political group that has been sneaking into the heart of Dublin 4, in the shadow of the property developers, mega-rich financiers, and even the empty homes of tax exiles to debate economic and social policies.
What daring cheek of those clever Provos. One minute it’s all Armalites and Semtex, you blink, and suddenly it’s a Lisbon Treaty in one hand and a draft county development plan in another.
Okay, it wasn’t quite so dramatic but the ice has definitely cracked and Sinn Féin’s media coverage has finally turned a corner, or at least bottomed out. The Irish Times even devoted separate articles to delegates’ debates on health, taxation and the EU.
So what really happened at the Ard Fheis? Well, things have changed. The canteen was more empty than in many previous years and the conference hall much more full.
But while we have been discussing policy at Sinn Féin ard fheiseanna for over a century, this year it was a little different, and it showed firstly in the clár. Gone are a lot of the motions demanding government do this or that, replaced by practical solutions and well-thought-out proposals.
Sinn Féin across the island has developed most clearly into a solution-focused party and this was plain through every bit of the Ard Fheis, from the smoother organisation: no crushes, very few queues, the spirit of debate, where there were clashes on policy it was all in the spirit of doing the best, being the best for our communities.
It was hard not to see an air of quiet competence throughout the Ard Fheis, from the delegates making notes in their clárs, from the full hall to succinctly-made points from the rostrum. Delegates from every Cúige spoke with conviction and confidence and this was the theme of the Ard Fheis: we won’t be bullied on Lisbon, on privatisation, health or local government reform, or the economy. We know what we want, we don’t do the politics of knee-jerk, or back-slapping.
Sinn Féin does do analysis, does do hard thinking and while the Ard Fheis was fun it seemed that it was business during the day and partying could wait until the Le Chéile event on Saturday night.
So it was good that when the media who annually attend Sinn Féin ard fheiseanna woke up Rip Van Winkle-like that they saw a party ready for anything the political establishment can and no doubt will throw at them.