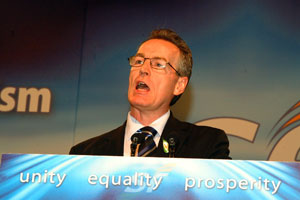 POLICING SPOKEPERSON in the Six Counties, Junior Minister Gerry Kelly, told delegates not to lose their nerve on the big issue of devolving policing and justice powers to the Six-County Executive.
Kelly said the creation of a Department of Justice in the Executive is the “next big challenge” for Sinn Féin, which “will not be without difficulties”.
Kelly said:
“The ‘No’ men within political unionism are becoming further isolated on this issue. The two governments and all of the other parties are on board. We need to ensure that the voice of communities across the North is heard on this issue.”
He said that people see the logic and importance of transferring these powers. “This is not an argument that the rejectionists in the DUP will be allowed to win.”
He urged republicans to stand fast on this issue.
“I call on republicans to keep our nerve. Keep delivering policing change. Keep the pressure up on the two governments and keep our eye on the prize of a fully accountable policing service in the North for the first time since partition.”
Kelly described the vote taken at the Special Ard Fheis last year as “absolutely the right decision”.  He said there is plenty of work still to do but that the issue is no longer simply part of a negotiation one step removed from most activists. “Delivering policing change is now an everyday part of our councillors’, MLAs’ and activists’ political work,” he said.
Addressing the issue of scrutiny, he said:
“I need hardly say the PSNI are far from perfect. But what is noticeable over the course of the past year has been the levels of scrutiny and indeed proper and constructive criticism which has been provided by Sinn Féin members on the Policing Board and DPPs and by ordinary nationalists and republicans liberated by our decision here last year.
“This is good for policing and good for the community.”

DRIMNAGH MURDERS
The recent brutal murder of two young Polish men in the Drimnagh area of Dublin and the subsequent arrest of four teenagers for questioning were part of the backdrop to the Ard Fheis debate.
A year on from the Special Ard Fheis, it was clear that the historic decision made then in terms of engaging with policing structures was a liberating one which allowed activists concentrate on the practicalities of holding the police to account and building safer communities in both jurisdictions.
The party’s spokesperson on Justice in the 26 Counties, Aengus Ó Snodaigh TD, referred to the tragic deaths of the two young Polish men:
“The brutal killings of Marius and Pawel in my own constituency is not only a tragic blow to their respective families but to the entire community in Drimnagh itself and to Irish society.”
Questioning the Dublin Government’s commitment to combating the drugs crisis, the Dublin South Central TD said: “While Bertie in the 1990s seemed to be accepting bung after bung, communities were being ravaged by drugs and the state was attacking anti-drug activists.
“Now we have a worse crisis and drug services were being cut while the Government is giving more to the horse and greyhound racing fund than to tackling drugs.”
Sinn Féin’s involvement in campaigns against drugs in Dublin in the 1980s and 1990s had “effected change at the time and made a positive impact”, Ó Snodaigh said.
“We were respected and supported by our communities for doing so.  This hard work continues today, in a different but no less meaningful way.”
Ó Snodaigh went on to list initiatives undertaken by Sinn Féín activists and representatives in Dublin, Donegal, Waterford and Bandon, County Cork.