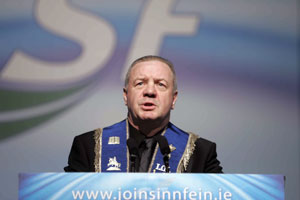 On the road to Irish unity

IN WHAT may well prove to be the most significant but least-reported decisions of the Sinn Féin Ard Fheis, delegates unanimously adopted an Ard Chomhairle motion committing the party to produce a ‘Road Map to Irish Unity’. The motion recalled the landmark document Towards A Lasting Peace in Ireland of 1992 which was a precursor to the Peace Process. Now the party is committed to produce “an updated strategy to make partition history”.
Proposing the motion, Martin Ferris TD said it is up to republicans to lead the way:
“If republicans begin now to build a mass popular movement in support of the achievement of Irish unity then that goal will be brought a lot closer and a lot more quickly. We can use the preparations for the 100th anniversary of 1916 as part of building a mass movement that will ensure that the objective of the men and women of Easter 1916 is made a reality.
“Republicans throughout the island must be to the forefront of their communities building links with all who are supportive of Irish freedom and demonstrating to them the practical benefits of unity. Only through this and our practical work in improving people’s lives will the idea of the Republic become a living reality.”
Deputy First Minister Martin McGuinness, in his keynote address, said we have been living through momentous political events since the establishment of the Executive last May. He asked who could have predicted that Sinn Féin and DUP ministers would be working together:
“Who would have predicted myself and Ian Paisley jointly heading up an Executive in the North? Who would have predicted that, each and every day, Sinn Féin and the DUP would be sitting down, working together, solving problems, delivering effective government. We have already delivered a budget – agreed and equality proofed – an £18 billion Investment Strategy, and an effective Programme for Government
“Every week, ministers, North and South, are working together, taking decisions affecting the lives of every person on this island. This is all-Ireland politics at work – and this after less than a year of us travelling along this road. Imagine the strides we will make by unlocking the undoubted potential of the opportunities which will lie ahead.”
McGuinness said that, unlike former First and Deputy First Ministers David Trimble and Seamus Mallon, he and Ian Paisley have refused to allow differing personalities and political outlooks to grind government in the North to a halt. He then spoke of the growing irrelevance of the border:
“An increasing part of my work sees me meeting with business leaders from every corner of the island – people, I have to say, who have already embraced the logic of all-Ireland economics. For the developing all-Ireland economy, the border is already irrelevant. For those planning major infrastructural road and rail projects, the border is already irrelevant, as it is to an increasing number of policy makers across a range of sectors.
“None of this came about by accident. It came about following years of political negotiations and difficult strategic initiatives on our part.
And as we now grapple with the new challenges faced by leading the government in the North we again need to show the same political skill and thinking.
“The same tenacity, the same ability and the same skills which we as a party brought to developing the Peace Process are the very same skills we now need to bring to every part of our work, be it in the institutions in Dublin, Belfast or Brussels, or in every city and town the length and breath of this island as we go about building a united Ireland.”
He described the transfer of policing powers from London as “a vital component of the wider battle of transforming policing in the Six Counties and creating, for the first time ever in the North, a representative and accountable policing service”.
McGuinness stressed:
“During the talks which led to the first meeting of the Sinn Féin and DUP leaderships on 26 March, a senior member of the DUP delegation said that his party would stand by the St Andrew’s Agreement. People are now demanding that they do just that. The two governments must fulfil their commitments on this issue.”
The most extraordinary moment of the Ard Fheis came when Raymond McCord Snr, whose son, Raymond Jnr, was murdered by the UVF, came to the podium and donned his father’s sash to applause from the delegates. He said he remained a unionist but he commended Sinn Féin for exposing the reality of collusion which he had once believed to be republican propaganda. He spoke of the many murders of Protestants by the UVF and was scathing about unionist politicians and former RUC chief Ronnie Flanagan for covering up state involvement in loyalist killings. He concluded: “No surrender to collusion!”
Carmel Quinn spoke on behalf of the relatives of the 11 people murdered by the British Army in Ballymurphy over three days in August 1971. She gave a graphic and moving account of the massacre, little known outside of Belfast, and carried out by the Parachute Regiment, who murdered 10 men, including a parish priest, and a mother of eight. Forty-six children were left without a parent. “The British covered up and wrote us out of history. We want to be written back into history,” Carmel declared.
Policing and Justice spokesperson Alex Maskey MLA said the British Government has never acknowledged its role in this conflict.
“They still hide behind the lie that they were somehow honest brokers between two warring tribes. They were not. They were an occupying army engaged in a war on our streets.”