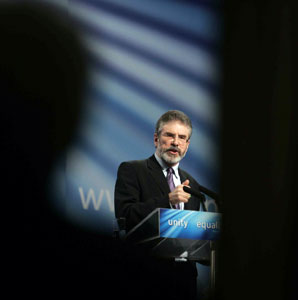 ‘We can build the united Ireland our people deserve’

BELOW we reprint an edited version of the Presidential Address delivered by Gerry Adams MP, MLA to the Sinn Féin Ard Fheis at the RDS in Dublin on Saturday, 1 March.

The full text of this speech is available on the Sinn Féin website at http://www.ardfheis.com/news/7421. A podcast of the speech can be downloaded at www.sinnfein.ie/news/podcast. It can viewed on the web at www.rte.ie/news/2008/0301/newsspecial.html.