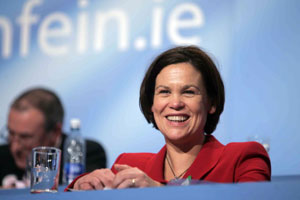 THIS year’s International Affairs section was dominated by the forthcoming referendum on the Lisbon Treaty. While the party’s opposition to the treaty is already well-established, delegates debated an Ard Chomhairle motion setting out the key lines of argumentation.
Mary Lou McDonald MEP challenged Europe Minister Dick Roche to a face-to-face debate on the Lisbon Treaty and called on the Government to name the date of the referendum. The Dublin MEP told delegates:
“This debate is not a contest on who is the better European. It is not about whether or not Ireland should play its role in the EU.”
McDonald explained the party’s opposition to the treaty, saying:
“We in Sinn Féin oppose the Lisbon Treaty because we are ambitious for Europe. We cannot support a treaty that gives unaccountable and unelected officials greater powers, under-cuts public services, commits Ireland to a common defence and reduces Ireland’s voice on the EU stage.”
Louth Councillor Tomas Ó Searcaigh outlined the Lisbon Treaty’s support for nuclear power and reminded Environment Minister John Gormley of his own remarks that provisions on nuclear power are “a bomb under the Lisbon Treaty”.
Áine Downes of Ógra Shinn Féin gave a moving personal account of how she believes the Lisbon Treaty would affect her life, arguing that its emphasis on competition and privatisation would further undermine Irish public services, driving up costs and undermining the standard of living for students.
Dún Laoghaire representative Eoin Ó Broin challenged Labour Party leader Eamon Gilmore’s assertion that the treaty would be good for public services, arguing that, to the contrary, it would “deepen inequality, social exclusion and poverty”.
Leitrim’s Martin Kenny said that saying ‘No’ to the Lisbon Treaty is an opportunity for Sinn Féin to be “good Europeans”. He argued that rejecting the treaty is an essential first step in constructing a better future for the EU.
The Ard Fheis also heard Dutch Socialist MEP Eric Meyer outline why his party, and a majority of the people of the Netherlands, rejected the EU Constitution in 2005, and why he is rejecting the Lisbon Treaty. He outlined the impact of the treaty on issues such as democracy, militarisation and public services, criticising the EU for working solely in the interests of the powerful states and corporations to the detriment of the people.

GAZA CRISIS
The International Affairs section also saw debates on the Iraq War, US torture, the Rome Statute, the Basque Country and Cuba.
Paul Cassidy from Monaghan called on all comhairli ceantair to have anti-war officers to ensure that the party plays a proactive part in the ongoing campaign against the US and British occupation of Iraq.
Cumainn from Belfast, Cork, Cavan and Dublin and the Ógra National Executive all sponsored a motion criticising the Spanish Government for its criminalisation of Batasuna and supporting the Basque people’s right to self-determination.
The Ard Fheis also passed two emergency motions in the International Section. Bairbre de Brún MEP spoke to a motion highlighting the urgent crisis in Gaza, and “called on the international community to act together to force an end to Israel’s inhumane and indiscriminate ‘punishment’ of the Palestinians in Gaza”. A motion congratulating Fidel Castro on his “past 49 years of socialist revolution” from Derry’s Pádraig Pearse Cumann was also passed.