Ian Paisley to resign in May 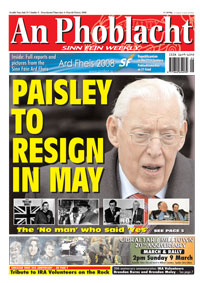 IAN PAISLEY announced on Tuesday that he is to retire in May as First Minister in the North’s Executive.
Paisley also confirmed that he is stepping down as leader of the Democratic Unionist Party, which he founded in the early 1970s.
The 81-year-old DUP leader will resign following the international investment conference in Belfast in May. He will continue to be an MLA and an MP.
“I came to this decision a few weeks ago when I was thinking very much about the conference and what was going to come after the conference,” Paisley told UTV.
“I thought that it is a marker, a very big marker and it would be a very appropriate time for me to bow out.”
Paisley denied he is leaving over the controversy involving his son Ian Paisley Jnr’s connections with businessman Seymour Sweeney. The DUP leader said his son had been “wrongly accused”.
It has been known for some time that some within the leadership of the DUP wanted Paisley to go. This group believes he was weakened over the controversy which led to the resignation of his son as a junior minister on and by the DUP’s defeat by the Ulster Unionist Party in the recent Dromore by-election.
Paisley did not publicly back any contender in a DUP leadership contest to succeed him: “This is not the Church of Rome; I have no right to say who will succeed me.
“I will not be like Putin in Russia, saying to the president, ‘This is the way you have to go.’ When I make a break it will be a break.”
Paisley defended his decision to enter government with Irish republicans.
“It was the right thing to do because it was the only thing to do to save us from a united Ireland. We were threatened that we would be more Irish in our rulership, that there would be more Dublin say in government. That was what the British Government threatened. We managed to put that to a rest.”
Sinn Féin President Gerry Adams extended best wishes to Paisley:
“The leadership of the DUP is a matter for that party and Sinn Féin will work with whoever is leader of the DUP.
“I want to commend the positive contribution Mr Paisley has made in recent times.
“The agreement that he and I made last March cleared the way for the restoration of the political institutions. However, whoever the new leader of the DUP is, they will be faced with significant challenges around issues like the transfer of power, the rights of Irish language speakers, a bill of rights and much more.
“It is important that they come to these issues intelligently and positively and in keeping with their obligations.”
The North’s Deputy First Minister, Sinn Féin’s Martin McGuinness, said the resignation wasn’t entirely unexpected. He described Paisley’s decision to enter government with Sinn Féin as “courageous”.
“We have had a positive and constructive working relationship,” McGuinness said.
Rejectionist unionist and ex-DUP MEP Jim Allister claimed that opposition to power-sharing with Sinn Féin and Paisley’s relationship with Martin McGuinness meant that Paisley “jumped before he was pushed”.
DUP Finance Minister Peter Robinson remains the favourite front-runner in the contest to succeed Paisley. This is not a foregone conclusion, however, and those in the party who still oppose power-sharing and the Good Friday Agreement may have other ideas.

IAN PAISLEY has been a key figure on the Irish political landscape over four decades.
The founder of the Democratic Unionist Party and the Free Presbyterian Church of Ulster, Paisley was born in Armagh on 6 April 1926 and brought up in Ballymena, County Antrim, the son of a Baptist minister.
Ordained in 1946 he was, until recently, Moderator of the church he established in 1951.
Since the early 1960s, Paisley’s political and religious activities seemed intertwined and he has been regarded as a conservative, firebrand gospel preacher as well as a belligerent and bellicose unionist demagogue.
In the 1960s, he campaigned against Six-County Prime Minister Terence O’Neill’s so-called ‘rapprochement’ with the 26-County state and his meetings with Taoiseach Seán Lemass. He opposed anything that he interpreted as concessions by O’Neill towards the Northern nationalist community or any hint that the absence of civil rights in the North or the abolition of electoral gerrymandering would be tackled.
In 1964, after the RUC bowed to his demand that the RUC remove an Irish Tricolour from Sinn Féin’s Belfast offices, there were two days of rioting. This event proved to be a politicising one for many young Belfast people at the time who went on to become active within republicanism.
In 1969, Paisley was jailed along with Major Ronald Bunting for organising an illegal counter-demonstration against a civil rights march in Armagh.
Paisley opposed O’Neill’s successors as Six-County premier, James Chichester-Clark and Brian Faulkner.
Paisley was a member of the old Stormont parliament from 1970 to 1972, having been elected as the Protestant Unionist Party MP for North Antrim in 1970.
He opposed the 1972 suspension by the British Government of the Stormont apparatus. He formed the DUP the same year.
He opposed the Sunningdale Agreement in 1973 and co-operated with loyalist paramilitaries in the 1974 Ulster Workers’ Strike, leading to the collapse of the power-sharing administration. He was later centrally involved in the failed 1977 loyalist strike.
As well as opposing nationalism and republicanism, Paisley also has a terse relationship with the Ulster Unionist Party, branding each of their leaders in turn as a traitor or ‘Lundy’ if he thought they were attempting to accommodate nationalists in any way.

Paramilitarism
Paisley has often had a direct involvement with unionist paramilitarism. On one occasion he led 500 men brandishing legal firearms certificates up a County Antrim hill in the dead of night.
He opposed the Hillsborough Agreement of 1985 and brought loyalists onto the street to demonstrate against its operation. During this period Paisley helped to found the unionist paramilitary Ulster Resistance organisation which later imported lethal weaponry from South Africa which was later used to murder nationalist civilians.
In the 1980s the DUP conducted a ‘Smash Sinn Féin campaign’ and Paisley and other DUP leaders posed with sledgehammers. This was at a time when unionist paramilitary death squads were using sledgehammers to break into the homes of nationalists and republicans, including Sinn Féin members to murder them.
In 1995, Paisley played a part in the first stand-off over the Orange Order Drumcree parade. When the RUC capitulated to unionist demands and forced the march down the nationalist Garvaghy Road, Paisley did the notorious ‘victory jig’ with Ulster Unionist Party leader David Trimble.
Paisley and the DUP opposed the Good Friday Agreement of 1998 but the DUP fought the resulting Six-County Assembly and the DUP took two seats in the power-sharing executive.
Following the suspension of the political institutions in the Six Counties in 2002 and Assembly elections in 2003, Paisley’s DUP emerged as the leading party in the North.
A DUP demand for photographs of the IRA putting arms beyond use was never realised.
In the October 2006 St Andrew’s Agreement, Paisley and the DUP agreed to new elections and to support a new executive including Sinn Féin.
In the subsequent elections, Paisley and the DUP received an increased share of the vote and increased their Assembly seats from 30 to 36. On Monday, 26 March 2007, the date of the British Government deadline for devolution or dissolution, Paisley led a DUP delegation to a meeting with a Sinn Féin delegation led by Gerry Adams which agreed on a DUP proposal that the executive would be established on 8 May.
On that date, power was devolved, the Assembly met, and Ian Paisley and Martin McGuinness were elected as First Minister and Deputy First Minister in the Six Counties.