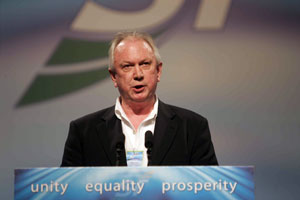 MANY trade union leaders across Europe are reconsidering their support for the European Union because it favours business interests at the expense of workers, Unite – the Union Regional Secretary Jimmy Kelly told delegates.
Outlining the reasons for Unite’s opposition to the Lisbon Treaty, saying it strikes at the very heart of trade unionism, Kelly pointed to recent European Court of Justice judgments in Finland and Sweden which threaten the ability of unions to enforce past agreements by allowing companies to exploit workers from other EU states paying them lower wages. Kelly said:
“This is about the subordination of social Europe below corporate Europe. They have given the green light to social dumping.
“Let’s be clear about all of this: employers are turning workplaces into war zones, demanding real wage cuts and taking off with the profits.”
Kelly was the second senior trade union leader to address a Sinn Féin Ard Fheis following on from last year’s appearance by SIPTU President Jack O’Connor.
Speaking to both the activists and trade union representatives in the hall, he said:
“We can sit back and despair. We can pretend we are making a difference when we agree deals with employers and right-wing parties. We can content ourselves with the trappings of power, knowing full well that they are only trappings. Or we can develop another agenda, a new agenda, one that makes the trade union movement relevant to working men and women and builds on the fundamental principle that informs all progressive causes – social and economic justice.”
Kelly pointed out that only one in four workers in the private sector is unionised and that the first problem to tackle is increasing membership. He added:
“At all times we must build trade union unity and move away from the debilitating rivalry that was too common in the past.”
Kelly paid tribute to Sinn Féin’s “long, hard, brave work” in the North and called on the party to pursue workers’ rights policies in the Assembly.
He also set out his union’s demands coming into the 26-County pay talks, highlighting the need for a wage deal that benefits the low-paid and a legal right to trade union representation.
Kelly concluded by congratulating Sinn Féin and the Labour Party for their co-operation on the agency workers’ debate in the Dáil and he called for future alliances among the Left.
Agency workers and the difficulties facing the trade union movement were the main themes of the Workers’ Rights section.
Trade union representatives from SIPTU, Mandate, Unite, IMPACT, BATU and several other unions attended to hear the debate on Saturday.
Sinn Féin’s Workers’ Rights spokesperson, Arthur Morgan TD, lambasted the Fianna Fáil/PD/Green Party Government for failing to deliver legislation that would bring an end to the exploitation of agency workers and for creating “a race to the bottom in wages and entitlements”. He paid tribute to the trade union movement for its agency workers campaign and called on every person of working age to join the fight for equal treatment and workers’ rights.
Dublin City Councillor Daithí Doolan and Caoilfhionn Ní Dhonnabháin and Joanne Spain of the Sinn Féin Trade Union Department all addressed the agency workers issue and reiterated Sinn Féin’s commitment to pressuring the 26-County Government for legislation based on the principle of equal treatment.