Lisbon Treaty will result in huge loss of power for Ireland 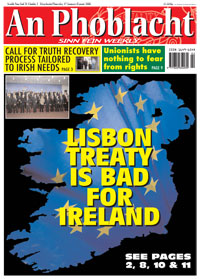 Sinn Féin Dublin MEP Mary Lou McDonald has said that contrary to suggestions by the Irish Government and Fianna Fáil MEPS, the Lisbon Treaty will result in a loss of power for Ireland. And McDonald said it was laughable for Fianna Fáil to suggest that the loss of an automatic seat on the EU Commission somehow represents a new era for equality.
“Despite claims of making the EU more democratic and efficient the Lisbon Treaty will move political power further away from ordinary citizens offering only cosmetic increases in powers to parliaments in member states and the European Parliament in return. Reform is needed but it is not contained in this Treaty”, McDonald said.
“Fianna Fáil’s suggestion that the loss of an automatic seat on the Commission somehow represents a new era for equality is laughable. Contrary to what Dick Roche and Brian Crowley have been saying in recent days proposals in the Lisbon Treaty would result in a loss of power for Ireland. The Lisbon Treaty would mean that we would no longer have an automatic right to a Commissioner, our weighted voting strength on the European Council would reduce by more than half and the country would have one less member of the European Parliament”, she said.
“On top of this the Lisbon Treaty will see a massive transfer of power away from the Dáil to Europe – the range of powers being proposed is far greater than in any previous referenda. And it is worth noting that not one power is being returned to parliaments in member states”, said the Dublin MEP.
“The government says that the EU needs reform and they are correct but they seem to have forgotten that there have been a succession of treaties – plenty of opportunities to introduce reform – but it has never been availed of. So we can only conclude they are not serious about making the EU either democratic or equal.
“This is not about efficiency. These are proposals that would have far reaching consequences for our economy, our reputation internationally and for democracy”, she said.