Mary Lou tells EU leaders: 'Let Ireland get on with our own referendum' 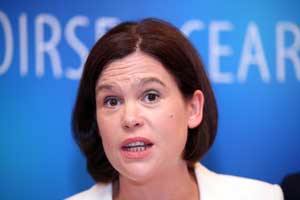 MARY LOU McDonald stood up in the European Parliament this week and told fellow MEPs to let the Irish people get on with their own referendum on the EU Treaty.
“2008 is set to be the European Union’s most decisive year,” the Sinn Féin Dublin MEP said on Tuesday, 18 December. “The Lisbon Treaty will shape the EU’s future irrevocably.
“Proponents of the Treaty state its purpose is to provide a mechanism to streamline decision-making powers for a burgeoning bureaucracy. This is not true.
“This is an ambitious political strategy to move member state decision-making areas such as taxation, foreign policy and social provisions from national parliaments to the institutions that remain beyond the democratic reach of ordinary people.”
She said that the EU Commission has made no secret of its desire to decide on matters relating to corporation tax and that, having secured jurisdiction in monetary policy the EU now has its sights set on fiscal policy.
“Provisions relating to national parliaments contained within the Treaty such as citizens’ petitions and the yellow card system are tokenistic and are of no meaningful value to member states,” she said.
The Dublin MEP maintained that it is ironic that the same champions in Ireland of such policies contained within all European treaties point the finger of blame at Brussels when the consequences are felt by ordinary people – the Brazilian beef and school water charges debacles being just two current examples of this.
McDonald left her EU parliamentary colleagues under no illusions:
“In Ireland we will have the opportunity to vote on this treaty. I suspect Bertie Ahern is envious of French and Dutch leaders, who can ignore the views of their citizens expressed so clearly in 2005.
“Repeatedly, Taoiseach Ahern and his Government cohorts pretend that our reputation of ‘good’ Europeans requires acceptance of this treaty. In fact, the values of democracy and the building of peace and respect for diversity, to which the EU is rhetorically committed, are best protected by good Europeans rejecting this bad treaty.
“Irish people do not need the ‘great and the good’ of Europe telling us there is no alternative to Lisbon. I have one simple message to EU leaders: If you are keen to be involved in a referendum campaign, organise one in your own country and leave us to get on with ours.”