INTERVIEW : Nicky Kehoe - leaving the council but remaining in the Party 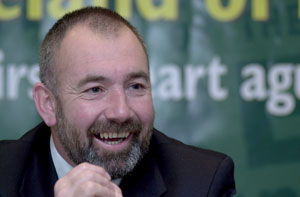 Nickey Kehoe — my whole life has been republicanism, from

NICKY KEHOE has announced that he is resigning his seat on Dublin City Council, sparking all sorts of mischief-making stories by political opponents and the Establishment media even though Nicky is still in the Party.
ELLA O’DWYER spoke to Nicky in his Cabra heartland about his work as a councillor and why he’s resigning his council seat.

AN PHOBLACHT: Had you always been interested in electoral politics?
NICKY KEHOE: When I got out of Portlaoise Jail in 1992, after 12 years, I’d no intention of getting involved in standing for elections. But then I got back involved in community work, basically with the GAA with the club here, St Finbarr’s.
I was born and raised here in Cabra and part of the community so naturally I’d be involved with local issues and the big issue was anti-drugs campaigning.
One evening, in 1995, a number of women approached me and said we’d have to do something about the drugs situation in some way. Most of the women had sons who were addicted to heroin and they felt the local authorities weren’t doing anything about it. I was seen as a republican and a kind of leader in a way.
At first I told them I didn’t want to get involved because I didn’t want republicans looking like we were trying to organise political strength on the back of a drugs crisis. The media would have said the Provos are taking over the anti-drugs issue – riding on the back of it. In the past, republicans were involved in the anti-drugs issue but we were doing so as parents and members of the community.
We tried to get a premises to hold a meeting but couldn’t. The church and parish halls had a bias against us – they thought we were trying to build bases for Sinn Féin. St Finbarr’s clubhouse was built in 1995 and the GAA committee agreed to let us use it for the meeting. That was the start of the anti-drugs campaign here in Cabra.

How did that work translate into electoral politics?
I was approached by someone in the Movement in 1997 and asked to stand for the council elections in 1999.  We set up a directorate and a plan of action to get us elected.
We knew we’d win it because there were 70 or 80 people coming out leafleting three times a week at least on a week-to-week basis. These people weren’t necessarily republican but they were community people who believed in what we were standing for.
I really want to thank those people and also my family. They were a great support though they are apolitical.
I would have been seen here as an ordinary guy though I had a knack of organising people. We got a good bit of support from the Movement but we did a lot of it ourselves. In 1999, we were only 50 votes off topping the poll but we were elected on the first count.

Then you set your sights on the 2002 general election.
Yes. We were sitting pretty after the 1999 locals and we decided we’d go for the generals.
The Movement agreed to open one office for Dublin Central, which is a huge area. I knew that if I was to have any chance of winning the vote in Cabra I would need to open an office, so we opened a place at 58 Fassaugh Avenue. I just went ahead and opened it and didn’t tell anyone we’d no money [Laughs].
We’d run dos here in the GAA club once a month and do big raffles. We’d fill the club with three or four hundred people and we had a good finance committee. So we put the machine in place and worked the two years coming up to the elections. We got great support in the community and I want to thank all those people – they were local people.

It was a great election campaign and you came within a hair’s breadth of taking a Dáil seat.
It was a great team effort – the likes of Dermot, Joe and of course Christy.
It was a wet day on polling day. We thought we’d enough work done to win and we got 5,000 votes; Tony Gregory got 5,600; the Taoiseach got 8,000. We lost by a mere 74 votes. It was a heart-break to an extent but it’s like a football game and you dust yourself off and get on with it.
I went back into my constituency to do my own council work and get ready for the next locals, in 2004, when we doubled and almost trebled our vote.

Why?
I thought I’d already given the work my best shot. I also needed to stay working in the constituency to keep the momentum going here. I thought it was time for a younger person to take on the challenge.
Realising we’d need an alternative candidate Christy Burke, myself and a few others sat down and looked at who would be the candidate with the best chance of winning the seat here.
We decided we needed someone high profile who’d get us maybe that extra thousand votes or so. We asked Mary Lou McDonald to come into this constituency. It was put to the leadership and there were a few meetings to discuss it.
We brought Mary Lou in. The papers have been trying to spin a notion that I was sidelined. No-one sidelined me. Nobody could sideline me in this constituency because there would be no support for that sort of move. We nominated her and we gave her our full support.

How did you feel about the general election result this year?
Well we were all disappointed but the swing went to the Government. People have to realise that, with elections, anything can happen. It’s like football: you win some, you lose some.

So what now, Nicky?
I’m not a money person but I have to get a few bob for the family so I’ll get working in the construction industry.
My whole life has been republicanism, from 15 years of age. I’d also like to do a bit of writing, stories. I used to write in jail.
I’m a republican and I always will be. But things need to move on. I’ll be staying on in Dublin City Council until my replacement takes over but I’m in the council for eight years. It’s time for a younger person to take over.

What would be your advice to a new, aspiring councillor?
Be straight, honest and upfront with people always.
Keep a good team around you and never close any door. Keep good lines of communication with people, whether they’re against you or not. Go to the ones that don’t like you because they may well change their perceptions.
And have patience. I learnt patience [Laughs].