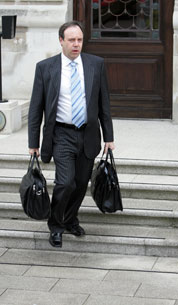 DUP Enterprise, Trade and Investment Minister Nigel Dodds has been accused by Sinn Féin of allowing his politics to blur his vision on an all-Ireland economy.
In a written reply from Dodds to Sinn Féin’s Mitchel McLaughlin about merging Invest NI and the Industrial Development Agency in the 26 Counties, the DUP minister replied:
“The competitive nature of procuring Foreign Direct Investment, and significant differences in our product offering, make a single operation, straddling two jurisdictions, impossible.”
McLaughlin said Dodds’s approach to the evolving all-Ireland economy would inhibit economic growth in the North.
“Since the emergence of the peace process and the creation of a new political dispensation, a number of eminent economists and leaders of the business community - such as Sir George Quigley, chairperson of Shortts Plc; and Alan Gillespie, chair of the Ulster Bank Group - have endorsed the all-island economy as the way forward,” McLaughlin said.
He said George Quigley had long been an advocate of an integrated economy and that, just last week, Alan Gillespie called for the merging of the two job-creation agencies on the island to “promote an all-island economy through a single, joined-up, effective agency, with the IDA and Invest NI no longer competitors, but fully collaborative”.
McLaughlin said that Nigel Dodds’s assessment of the way forward flies in the face of the opinions of economic experts from across the political divide and would seem to be highly influenced by partisan political considerations rather than factual, pragmatic evidence to the contrary.
“I believe that if the minister persists with this approach that he will inhibit economic growth in the North and fall further behind the economy on the rest of the island.”