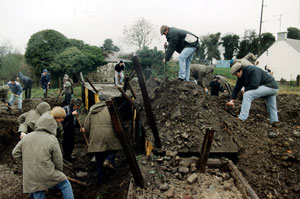 AT THE SAME TIME as the world was hailing the people of a divided Germany for tearing down the Berlin Wall, the British Government was doing its damnedest to make sure that its artificial partition of Ireland was maintained through a network of spy-posts and concrete blockades across border roads that had been in place as far back as the 1920s.
In the 1990s, the people of the border counties, renowned for their imagination and dogged determination, showed the same tireless spirit in chipping away at ‘Britain’s Berlin Wall’. They were known as ‘Border-Busters’. ELLA O’DWYER spoke to some of them.

IN THE 1950s, border roads were blocked with heavy steel spikes but there weren’t too many cars in those times and people could get through by carrying their pushbikes through the obstacles and be on their way once they’d crossed over.
Twenty years later, in the 1970s, a campaign began to reopen roads blocked or blown up by the British Army. Monaghan Sinn Féin Councillor Pat Treanor was still at school.
“I’d hear the stories about what went on of a Sunday at the road reopenings along the Monaghan/Fermanagh border. People like Mary Treanor [no relation], Jimmy and Brian McKenna would have been working in the north Monaghan region.”
The British Army seemed to have tired of the cat and mouse game in which they’d block a road, local people would reopen it, the Brits would close it again, only for campaigners to open it once more.
“Then, about 1979 or 1980, Ian Paisley gave a Twelfth of July speech in Newtownbutler, County Fermanagh. He’d just returned from Israel, seen how the Palestinians were corralled in and demanded that the British close off the border and build a high-rise wire fence around it.”
Shortly afterwards, British Army checkpoints started going up and roads that had remained open were blocked.
“For the likes of Clones here, out of the eight roads leading into it, five were either closed or had a permanent checkpoint on them,” Pat Treanor explains. “That had social, economic and all sorts of effects on the town. Two thirds of the business in the hinterland round Clones came from County Fermanagh so these road closures wreaked havoc economically.
“Communities and parishes were divided. People would be harassed and abused going through the town to get to work. Farmers had their land divided and they had to take long detours to get to the other parts of their own farms because of the road closures.”
The British Government and the unionists argued that they were trying to thwart IRA attacks by blocking the roads and cutting off ‘escape routes to safe havens’ south of the border. IRA attacks continued unabated. So what was the point of the British Army spending huge amounts of money, troops and resources in trying to seal the border?
“The British strategy seemed to be to control the local community – to funnel locals through the checkpoints so that they could monitor movements, intimidate people and try to gather information and informers,” Pat Treanor says.
People were getting increasingly annoyed during the 1980s. It came to a head when Derryvollen Crossing, between Scotstown and Roslea, was closed. Local people had found their own way of getting round the road blocks and had improvised a pathway to get between the two parishes to go about their business. When the Brits closed that, there was uproar from the locals, supported by the parish priest, Fr McCluskey. The blockade affected people going to Mass on a Sunday and other important aspects of the social life of a rural community.
Pat Treanor notes the particular courage and determination of one local contractor who used his heavy machinery to remove the concrete barriers on the road. “That was risky because the machinery was expensive and there was always the risk that the Brits would confiscate it.
“The contractor’s stand sparked the desire to do something to address the worsening situation. The local community called a meeting in Clones of business people, farmers and families from both sides of the border: anyone who was affected by the road closures. In fact, a load of stones arrived mysteriously at one road reopening and it’s thought that they were supplied by a local Protestant. All members of the community stood to gain from the reopenings,” Pat Treanor says.

Alongside the hard toil of earth moving, digging and shovelling went lobbying, work that was harder in a different way.
“We wanted to raise awareness around the absolute nonsense of the border that was dividing local communities,” says Pat Treanor. “We lobbied local elected representatives and tried to raise the issue nationally and internationally. We also got help from the Irish National Congress: Bobby Ballagh and Margaret Urwin and the likes. They were a great help.”
As the campaign developed it became clear that people further south weren’t really aware of the reality of the border but local workers and farmers were good at explaining all the inconvenience involved. For instance, people might have to keep a second car over the border in order to get to work at all. Gradually, the campaign garnered support from members of the public from throughout the 26 Counties.
“There were days organised when there’d be a call for outside groups to come in and there would be buses from the likes of Dublin. Then, in the early 1990s, we held a very successful ‘Rock the Border’ concert at Lackey. Two well-known groups, the Hot House Flowers and The Big Geraniums, played on a makeshift platform. Hundreds attended. There was a great atmosphere of community solidarity.”
But the mainstream Irish media didn’t really want to know.
“The Irish media didn’t want to give any credibility to our campaign even though we had American, French and German independent TV stations and others over. We linked it with the Berlin Wall and this being Britain’s Berlin Wall.  Even though there wasn’t an actual wall on the border in Ireland, it had the same idea behind it. The British would put containers full of concrete across the road so, to us, it was to all intent and purposes a wall. Our message said that this was dividing North and South, like dividing East and West Germany.”
And with more and more European Union legislation and fanfare about breaking down barriers and opening up borders, the reinforcing of the border dividing Ireland seemed all the more incongruous, as Pat Treanor explains.
“In 1992, there was the Maastricht Treaty, which was supposed to be about breaking down borders. To make the point in relation to the remaining border at home, we decided that New Year’s Eve to hold a 24-hour vigil at Lackey Bridge, a couple of miles outside Clones. The event went on for 72 hours because it was so successful. It was a kind of festival atmosphere with bonfires and the like.”

By this stage of the campaign the road workers had become fast learners.
“We saw that where there was water where we wanted to replace the crossing we’d have to find a way of keeping the water flowing. So we took old, abandoned cars, turned them upside down and put them in the riverbed with the windows open so that the water could go through. Pipes were very expensive at the time.”
Shovels and pick-axes were all very fine for certain tasks but heavy machinery was needed for the most formidable barriers built by the British Army’s Royal Engineers.
“One very brave man by the name of Eugene Cosgrove, from Roslea, decided to do a fund-raiser to get the money for a Hi-Mac digger. When the Brits would come in to try to obstruct the reopening of the roads he’d use the arm of the digger to keep them back. And, of course, the work was getting done much faster.
“ The Brits would have to use helicopters and spotter planes before they’d chance coming in on the road workers to put in the readymix. It became a kind of a game of chess, a strategy based on being a couple of moves ahead of the opposition, because when we knew they’d be organising to come in on one road-opening site, we’d be off to carry out another road opening somewhere else.”
And so the battle between the British Army and the Border-Busters swung to and fro, until the IRA cessation on 31 August 1994.
“One of the first things the Brits did was to open the roads,” Pat Treanor notes. And he smiles: “They’d had enough of it and we’d won the contest over the roads.”
The Berlin Wall was finally breached on 9 November 1989. After nearly three decades keeping East and West Berliners apart, suddenly it was gone. The same happened in Ireland – for those who recognised the border in the first place.
“A unionist colleague of mine on the council recently recounted about having relatives visit him from abroad,” Pat Treanor says. “They asked him to drive them around to see the border. On being driven around they said to the councillor: ‘But there is no border.’”

"I’m from Kiltyclogher, the home of Seán Mac Diarmada, a quarter of a mile from the Fermanagh border.
My republican beliefs got me involved in the reopening of the roads when I was about 17. The Brits didn’t need checkpoints around Kiltyclogher because the bridges were blown up around the village in the 1970s, ultimately costing Peter Brennan and Eddie McCaffery their lives. One fella drowned as he was trying to cross over a remaining ridge of the bridge and the other got lost going through the fields.
I was working on the blockade at a place called Garrison, Dooard, on the Fermanagh border, six miles out of Kiltyclogher. We had no crossing from Leitrim to Fermanagh. It destroyed the town of Kiltyclogher.
It was all part of the resistance as far as I was concerned – against British occupation. I never recognised the border anyhow."

"I was 21 when I got involved in the campaign. I come a mile and a half from Drumfurrer, on the southern side of the border. It was a rural area and there were farmers with land on both sides of the border because of the way it was divided up in 1921 when lines were drawn down through farms.
Apart from An Phoblacht, the only ones to give us any real coverage were the Northern Standard, the local paper. And the almost total suppression of news coverage by RTÉ and the Dublin papers of the border closures and their effects affected people’s knowledge of what was going on in their own country.
The local football team was having a draw and we were over in the west of Ireland, in Castlebar, at a Connacht semi-final, trying to sell tickets for the draw. People asked where we were from and when we’d say Monaghan they’d say, ‘Oh, you’re from the North, the Six Counties.’ It was unbelievable that they didn’t even know where the border crossed. Of course, the media had always tried to isolate the ‘Troubles’ from the rest of the country."

"It was a real cat and mouse game. We had decoys, with women and men working round the clock. Women drove tractors and everyone got their wellies on – it was shoulders to the wheel. The unionist community were in a strange position. They wanted the roads closed but they wanted them open at the same time because they needed to be able to go about their business too.
There were numerous checkpoints along the borders between Derry and Tyrone. But the Irish Government also kept their posts in Donegal, places Castlefin Barracks where 32 gardaí and four sergeants were stationed; and Lifford, six miles from Castlefinn, had 32 gardaí and four sergeants. Nowadays, stations like these run on a part-time basis and as a member of the Lifford District Council and the Justice and Policing Committee I’ve asked how many gardaí we have on the beat. I never get an answer."