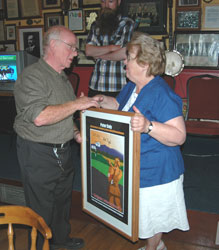 Republicans  gathered in the village of Monageer, County Wexford last Friday to honour IRA veteran and International Brigade Commander Peter Daly, 70 years after his death on a battlefield in north eastern Spain.
Local Sinn Féin activist John Turner chaired the ceremony.  Wreaths were laid on behalf of the Daly family by Peter Daly, the Republican Movement by Mick O’Leary, Councillor Nóirin Sheridan and Colum Donagher and in memory of the International Brigade by Liam Cooper. A piper played a lament.
The main speaker was Sinn Féin Councillor John Dwyer who said that what Peter stood for and what Sinn Féin stands for today is the promotion of equality and liberty for all the people of Ireland and throughout the world.
“These aren’t just pipe dreams. They are achievable goals. But it will take hard work and determination to bring that kind of Ireland about.  The type of hard work and determination that Peter Daly so obviously showed in his life from IRA volunteer to International Brigade volunteer.
“I would urge people, especially the young here today, to carry on Peter’s work. To champion the causes to which he gave his life.  Join your local Sinn Féin cumann.  Get involved in your community – stand up against injustice and inequality. Demand your rights.  Working together we can build a better and fairer society for all”, Dwyer said.
Dwyer also read a special message of support and solidarity from the last surviving veteran of the James Connolly Column of the International Brigade, Bob Doyle. In it he said, “To my comrades of the good fight, best of luck with your celebrations and fundraising.  Thank you for remembering the Wexford republican and Brigadista Peter Daly, Commander of the Battalion at Quinto. No Paseran.  Salud.”
The commemoration was followed by the first Peter Daly Memorial lecture by Jim Somers, who gave a fascinating and detailed account of the life and times of Peter Daly, from his school days right up to his death at the hands of fascists in Spain in 1937.
A special limited edition commemorative poster was launched on the evening to coincide with the event and is available from the local Sinn Féin for only €5. For orders call 053 91 22738
An Phoblacht
44 Parnell Sq.
Dublin 1
Ireland