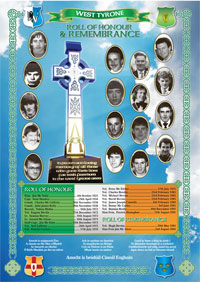 The full colour tribute to the republican dead of West Tyrone

The Annual West Tyrone Commemoration Weekend culminated in a parade from Ballycolman to the Republican Plot in Strabane Cemetery last Sunday, 9 September.
The large parade, which was lead by a 21 member colour party and two bands, paused for a wreath laying ceremony at the Hunger Strike Memorial at Townsend Street before making its way to the Republican Plot in Strabane Graveyard where Jay McCauley of Strabane National Graves officiated at the commemorative proceedings.
Following the reading of the Roll of Honour and Remembrance, by Siubhan Mhic Giolla Eoin, floral tributes were laid by family members and wreaths were laid and on behalf of the Republican Movement, Sinn Féin, Strabane National Graves, Ógra Shinn Féin and the Strabane Memorial Flute Band and the National Flag was lowered as the last post was sounded by two buglers.
Martina Anderson, in a wide ranging and moving speech, spoke of how our republican dead, have and will continue to inspire everyone committed to achieving the ultimate objective of Irish freedom, justice and equality.
Commenting on the weekend’s other commemoration events Nigel Mc Dermott, of the West Tyrone Commemoration Committee, said
“Events began on Friday night with a capacity crowd in attendance at the Annual Jim McAleer Memorial Shield Quiz in Sigerson’s Clubhouse in the town. Friday night also saw the official launch of an impressive A3 size full colour tribute to the republican dead of West Tyrone. Prior to this official launch, families of those listed on the West Tyrone Roll of Honour and Remembrance had been already presented with a framed copy of the tribute.  1000 copies of the tribute have now went on sale to the general public at £3 or €5 each with all the proceeds going directly towards covering the costs of commemoration events in this and in future years as well as contributing  towards the sterling work of Strabane National Graves.   These specially commissioned West Tyrone tributes are already in heavy demand so I would encourage people to secure a copy now so as to avoid disappointment.
In a joint statement following the Commemoration Weekend Jay McCauley and Nigel McDermott said: “The republican people of this area have once again demonstrated their support and respect for republicans who have given their lives in the cause of Irish Freedom and we would like to thank everyone who contributed in whatever way towards the success of this weekend’s commemorative events.