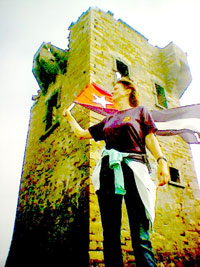 Camp Havana, an extraordinary solidarity gathering of Irish people with the people of Cuba, which has now become an annual event, took place last weekend, in the valley of Gleann Cholm Cille, in Donegal.
There is nowhere more appropriate to hold this camp than Gleann Cholm Cille, with its incomparable scenery, beneath the highest sea cliffs in Europe of Sliabh Liag, the cliffs that look across  the sea to America, which were, for so many, their last sight of Ireland which they had to leave behind  them in the times of the famine.
Several of the people who took part  this year had been amongst those who at he end of the 60s, before the Campaign began, were the volunteers who worked with, and of course, quarrelled with, pioneer, Fr. McDwyer, as they worked to bring electricity, water,  economic and social organisation through a community based  co-operative  to the  people in the valley.
They included Bill O’Brien, who organised this year’s Camp Havana,  Jim Monaghan, (Colombia 3), a couple from Kilkenny, and Christine Daly, originally  from Birmingham, who had been amongst the first people to the Valley as a volunteer,  had stayed on and now helped organise and feed the Camp Havana participants.
This year brought old and young to Gleann Cholm Cille including Noel Carrillo, the Cuban ambassador to Ireland, and his family, trade unionists, long time supporters of the Cuban Revolution such as Communist Party member, Sean Edwards,  Thomas Pringle, Sinn Féin councillor  from Killibegs, and other political activists, and people who have lived in Cuba.
The distinguished company of  hill walkers, linked by the inspiration of the Cuban Revolution, climbed the cliffs in a sponsored walk to raise funds for the Irish Cuban Solidarity Fund which buys up medical equipment and  drugs to break  the US blockade of Cuba.
Two years ago Camp Havana gave €3000 to Professor Hickey, of Beaumont Hospital,  to fund  support of the Cuban health programme.  Camp Havana, through the annual sponsored walk, has continued this solidarity.

Film
The theme of this year’s camp was the Cuban healthcare programme itself and its unparalleled contribution to healthcare in impoverished communities across the Third World.
Participants watched Salud!,  a powerful film  showing the international Cuban health programme working in Cuba, South Africa, Gambia, Honduras and Venezuela.  The film explores the politics that health is not a commodity, but a universal right, which necessitates a health system based on  preventative medicine,  patient focused, community based, primary care.
Thirty one thousand Cuban health professionals are currently working in 71 of the world’s poorest countries, to provide health care, where there is none, but where the IMF and World bank restrict local expenditure on health programmes, as a condition of aid, while the HSE scours the world to lure trained doctors from the poorest countries, who can least afford to loose them.
Since 2005 almost 5,000 physicians have been trained for free through the Latin American School of Medicine in Havana, including, ironically and despite the blockade, some 300 doctors from the USA.
It is no small contribution to humanity, in the same tradition of social change which inspired those first volunteers to Gleann Cholm Cille.
Salud, can be purchased and an accompanying health education course,(worksheets and discussion notes) very suitable for 4th year School programmes, can be accessed at www. Saludthefilm.net
Cuba Solidarity,and Simon McGuiness, coordinator of Cuba Support Group, can be contacted can be contacted at
http://www. CubaSupport .com