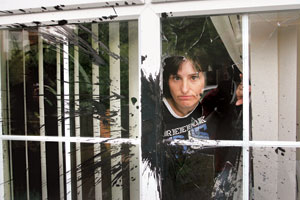 An Ardoyne couple tageted in a loyalist sectarian attack last week have slammed the attitude of the PSNI who arrived after the incident.
The Ardoyne home of Joe and Michelle O’Connor was attacked by loyalists in the early hours of Thursday morning 6 September as the couple slept upstairs.
Michelle O’Connor, who is three months pregnant, and her husband were awoken by the sound of breaking glass at about 1.30am. When the couple went downstairs to investigate the noise they discovered that their attackers had smashed in the front window of their home and thrown cans of paint around their living room. They also found that the loyalists had smashed the windows in the car which was parked at the front door. The home of a pensioner who lives facing the couple was also targeted by the same gang.
Speaking to the media Michelle O’Connor criticised the PSNI who arrived at the scene. The PSNI questioned the pregnant woman as to whether she had ever carried out attacks on Protestant homes.
Ardoyne priest Fr Aidan Troy echoed the O’Conners’ criticism of the PSNI saying that when he arrived at the scene of the attack a hammer, used to smash in the O’Connor’s window and a pair of surgical gloves were still lying on the road where the attackers dropped them.
It wasn’t until he complained to an inspector that the items were recovered for forensic examination.
An Phoblacht
44 Parnell Sq.
Dublin 1
Ireland