Opposition must unite against withdrawal of route - McDonald 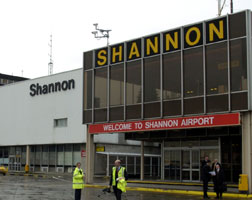 Sinn Féin National Chairperson and Dublin MEP Mary Lou McDonald has extended her support to the Shannon Action Group in their protest letter writing campaign launched today in an effort to put further pressure on the government to retain the Aer Lingus Shannon-Heathrow route.
“I would like to extend my continued support of the Shannon Action Group in their campaign work to retain the Aer Lingus Heathrow-Shannon route. The group’s ability to organise 2,500 letters written by Aer Lingus employees and Shannon Airport workers indicates the depth of support for their demands”, McDonald said.
“Connectivity for the region, balanced regional infrastructure and job security are integral to the future of the western corridor. Government endorsed economic partition between the east and west of the country cannot continue.
“When Fianna Fáil Ministers committed in the Dáil chamber to protect the country’s strategic interests with the government’s 25.1% shareholding in Aer Lingus Sinn Féin Deputy’s forewarned the government would do no such thing.
“We now have the ridiculous situation where the government refuses to use its shareholding yet it is trawling around the airlines of Europe offering up the route at bargain basement prices.
“This government is committed to an agenda of privatisation, at any cost. The political opposition must unite in guaranteeing the government deliver on its commitment to protect the country’s strategic interest by retaining the Heathrow Shannon route”, she said.
An Phoblacht
44 Parnell Sq.
Dublin 1
Ireland