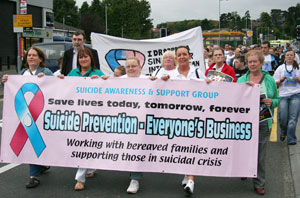 Sinn Féin Education Minister Caitríona Ruane has said that everyone has a role to play in preventing suicide. She was speaking as she launched a new information pack produced by the Samaritans aimed at providing emotional support for students across the North.
“For many years the Samaritans have provided vital support for anyone in emotional distress. This is available 24/7 from trained counsellors who make no judgements, but are simply there to help alleviate despair”, Ruane said.
“This new awareness pack developed by the Samaritans is aimed at young people just starting third level education. This is a time of great change for these students with new challenges and new pressures. We live in a society where new pressures emerge all the time and we need to help our young people deal with modern life.
“This is an issue of concern to government and I am part of a Ministerial team examining what the Executive can do to prevent suicide. My own Department has a significant role to play through awareness raising and prevention and contributes to the Suicide Prevention Strategy. In addition, colleagues in the Department of Health, Social Services and Public Safety have developed a suicide strategy and action plan, which is being taken forward.
“I believe in early intervention and, through the revised curriculum, we aim to enhance young people’s own awareness of the stressors in their lives and their capacity to deal with them. Our schools have a responsibility to safeguard and promote the welfare of pupils and we have a counselling service available to all post primary schools. In addition, my Department funds a post attached to the Anti-Bullying Forum, which aims to prevent and deal with bullying behaviours.
“Too many people die as a result of suicide. In recent, months we have seen a number of young people take their own lives. We can all help to end this tragedy by being more aware of our friends or family members who may be under pressure. I would particularly encourage young people who think or know that a friend may be contemplating suicide to get help for them. It is not breaking a confidence if you are saving a life.
“I applaud the work of the Samaritans and the universities involved and am sure this initiative will have a positive impact on many of our young people”, she said.
An Phoblacht
44 Parnell Sq.
Dublin 1
Ireland