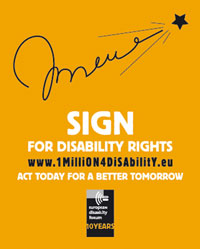 A campaign to secure one million signatures on a European wide petition for disability rights is in its final couple of weeks.  The European Disability Forum had set themselves the ambitious target at the start of the year with the aim of presenting the one million names to the President of the European Commission and the President of the European Parliament in Brussels on 4 October. The 1 Million 4 Disability campaign is about getting the EU to introduce effective legislation to combat all forms of discrimination and guarantee the full inclusion of the more than 50 million EU citizens that live with disabilities in the Union.  As the deadline approaches the pressure is on to get the final numbers needed to make the initiative a success.
Supporting the campaign is Sinn Féin MEP Mary Lou McDonald who has called on Sinn Féin activists the length and breath of the country to come out in the coming weeks to secure the final few thousand signatures needed from Ireland. “This is a great campaign by the European Disability Forum”, she said. “The target of one million signatures they set, while ambitious is I believe very achievable.  In Ireland we need about another 8000 names before the end of September.  I am calling on Sinn Féin activists and supporters to lend their support to this very worthwhile campaign – to give a day and go out and collect as many signatures as possible.  This Saturday we will be launching a leaflet and poster to coincide with the campaign.  We are looking for our people to set up stalls outside shopping centres, churches, education centres etc – to go door to door – to effectively do whatever it takes to get these names. And I would appeal to the public to respond positively.”
While Sinn Féin members will be collecting signatures at locations around the country during the coming weeks members of the public still have time to sign the online petition, which can be found at the European Disability