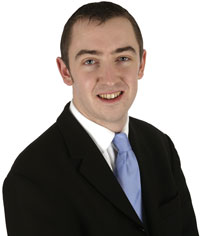 North Antrim Sinn Féin MLA Daithí McKay has called on the DUP to clarify its relationship with the developer of a private proposal for a Visitors’ Centre at the Giant’s Causeway in County Antrim. McKay was speaking after it was revealed that Seymour Sweeney, who owns Seaport Investments Limited, signed the nomination papers for a DUP Councillor who ran in the Local Government Elections in Moyle in 2005.
The Giant’s Causeway attracts over 500,000 visitors a year. The need for a new tourist centre arose when a previous building was destroyed in a fire seven years ago.
The British Government announced an international architectural competition for a replacement. The winning design costing £21m was chosen nearly two years ago.
Sinn Féin and the SDLP raised concerns in a debate at the Assembly on Tuesday over a U-turn on the proposal by the Environment Department.
DUP Environment minister Arlene Foster’s decision to favour a private developer in the construction of a visitor’s centre effectively hands over access to the site to private business. Small wonder that the decision has provoked howls of protest not only from all the other parties but also grass-root members of the DUP and local councillors. A vote at Coleraine district council unanimously condemned the Stormont Minister’s decision.
The situation worsened when Enterprise Minister and fellow DUP MLA, Nigel Dodds withdrew funding for a standing public development plan in favour of his colleague’s decision to privatise the site. Dodds announced he was cutting funding for a department of trade and investment backed project just hours after his party colleague admitted she favoured a private developer.
Meanwhile the National Trust, which owns and provides access to the Causeway, claimed any development on previously undeveloped land could put at risk the area’s status as a world heritage site.
Sinn Féin’s Daithí McKay said:
“It is vitally important that the DUP declare what its relationship with Seaport Investments and this developer is, especially given the fact that two of its Ministers have signalled that they are going to give him the go-ahead for a Visitors’ Centre which will net this developer millions of pounds.
“The publicly funded Visitors’ Centre would have seen profits from the Giant’s Causeway being reinvested in the area through Moyle Council and the National Trust and local people are totally disgusted that the profits that are to be raised through our World Heritage Site are to go straight into the private sector.
“People working in the tourist sector here are disgusted at these latest developments and are also aware that there may be a serious conflict of interest between the private developer and the DUP. There are a lot of questions which remain unanswered, especially in regard to the lengthy delays that the public sector proposal faced within DETI and the DUP Minister responsible Nigel Dodds also has a lot of explaining to do too. Why, for example, has Nigel Dodds withdrew his support for the publicly funded Visitors’ Centre even though the private application still hasn’t been approved?
“Given the nature in which the two DUP Ministers pulled the plug on a publicly funded Visitors’ Centre before the Assembly had an opportunity to debate the issue I think that  the DUP have a lot of serious questions to answer on this issue. I welcome today's adjournment debate and urge common sense to prevail on this debacle.”