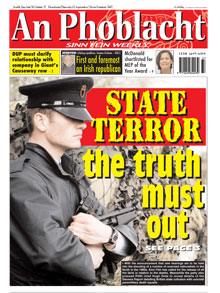 Tell the truth about shoot-to-kill

Sinn Féin MLA John O’Dowd has called for the release of all the facts in relation to six deaths at the centre of the British state’s shoot-to-kill controversy.
The call came as Belfast Coroner John Leckey confirmed that new hearings are to be held into the shooting of three unarmed IRA Volunteers Sean Burns, Gervaise McKerr and Eugene Toman, two members of the INLA, Peter Grew and Roderick Carroll and Catholic teenager Michael Tighe.
Allegations of shoot-to-kill at the time of the killings, led to an investigation by the then Manchester Deputy Chief Constable John Stalker.
The IRA Volunteers died in November 1982 after a vehicle in which they were travelling was riddled with bullets by a special unit within the RUC. Within the same month 17-year-old Michael Tighe was shot dead at a hayshed in County Armagh. Grew and Carroll were shot dead outside Armagh in December 1982.
Stalker encountered enormous difficulties during his investigation and was hounded out of office on the back of false allegations after he discovered MI5 involvement in the Hayshed shooting. Stalker’s report was never published and demands for a fresh inquiry have been resisted.
“It’s 25 years on and the families of these men just want to know the truth. They have called for the publication of the Stalker report. The British government should publish it,” O’Dowd said.
Commenting on the Coroner’s decision to re-examine the cases, O’Dowd said he hoped no further barriers would be erected.
“I urge Hugh Orde not to thwart John Leckey’s endeavour by sanctioning public immunity certificates,” he said.
Peter Madden, a solicitor acting for the families, said that the RUC members involved in the shootings could be brought to give evidence and the hearings could point towards criminal or civil responsibility.
“The surviving RUC men responsible for firing more than 100 rounds at the car containing the deceased will now be compellable witnesses at the inquest and shall be cross examined by the families’ lawyers,” said Madden.
“The coroner’s verdict can make explicit factual findings pointing towards a conclusion that criminal or civil responsibility exists,” said Madden.

Stevens Report
Meanwhile Sinn Féin Policing Spokesperson, South Belfast MLA Alex Maskey, has pressed PSNI Chief Constable Sir Hugh Orde to reveal full details of a dossier containing evidence of British state collusion with unionist paramilitary death squads.
Following three investigations into the activities of unionist paramilitary agents and informers, John Stevens found in 2003 that elements within the RUC and British army colluded in the murder of Catholics in the North during the 1980s.
Central to his investigation was the Ulster Defence Association shooting of Belfast solicitor Pat Finucane in front of his family at their north Belfast home in February 1989.
Files were prepared on at least 20 individuals, but in June this year the Public Prosecution Service (PPS) finally confirmed no charges would follow. Insufficient evidence was said to be critical to the decision, which outraged the Finucane family, campaigners and the wider nationalist community.
Alex Maskey challenged PSNI Chief Constable Hugh Orde to publish the Stevens Report at a meeting of the Policing Board last Thursday, 6 September. He put it directly to Orde that the excuse of possible prosecutions had been removed and that it is now in the public interest for the Chief Constable to allow the publication of the Stevens Report
Speaking ahead of the public session of the Policing Board Maskey said:
“It my clear understanding that there is nothing now standing in the way of the publication of Stevens. The decision now is solely down to the chief constable.
“In April 2002 Stevens said he could not publish his findings because it might undermine prosecutions but since then the Public Prosecution Service has said it will not prosecute any of the 24 members of RUC Special Branch and Force Research (FRU) at the centre of the Steven’s Findings.
“Former British Secretary of State Peter Hain has said that the demand for the publication of Stevens is a matter for the Chief Constable.
“Given the amount of money and huge investigation involved, the huge level of public interest – we now need to see this report published.
“Hugh Orde is now in a position to publish this report, a report that was financed by the tax payer that is one of the largest and most expensive police investigations in history that dealt with some of the most controversial murders of the conflict.”