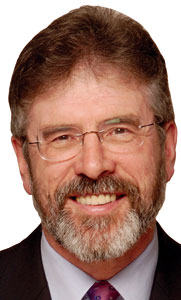 Sinn Féin West Belfast MP Gerry Adams led a party delegation, including Paul Maskey MLA, to meet Minister for Social Development Margaret Ritchie about the proposed development of the old Andersonstown RUC Barracks site last Monday.
Speaking after the meeting, Adams said:
“There is implacable opposition to the decision made by Margaret Ritchie earlier this summer to hand the old Andersonstown RUC barracks site over to a private developer.
“Sinn Féin believes that the Minister made the wrong decision.
“In a door to door canvass carried out by Sinn Féin during August, more than 95% of local residents confirmed that they had received no information from the Department or its preferred developer.
“At a meeting with the Minister on 8 August  she told me we would review all the papers relating to her original decision and today’s meeting was arranged to give her the opportunity to do this.
“I am disappointed that this process has not yet been completed.
“Sinn Féin has learned that the Department still has ownership of the site. In our view the land should be gift-aided to the local community for local use.
“Therefore, we asked the Minister again today to exercise her prerogative in favour of this option.
“Sinn Féin will continue to work with local residents, community, business and cultural groups to advocate the redevelopment of the site in the way which best meets the needs of local people. Our focus is to achieve the maximum potential benefit to the local community of the development of the site.”