Demand for truth about British violence heard in New York 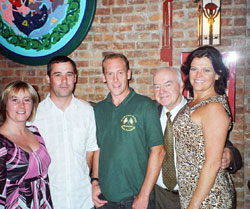 On the eve of the march for Truth in Belfast, Project Manager of Firinne, a group that represents and supports all victims of state violence throughout County Fermanagh, Bernice Swift and her brother Declan attended an anti-collusion event in Times Square, in New York City where they supported Alan Brecknell, Manager of the Pat Finucane Centre as guest speaker on the continued quest for truth about collusion and British state violence in Ireland.