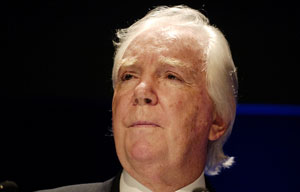 The campaign of lies and smears against Sinn Féin in the organs of Tony O’Reilly’s Independent News and Media did not end with the General Election. This is a long-term project fuelled by the reactionary politics of the Independent group and carried out in garish and increasingly sleazy style in the Sunday World which exploits public fear and public fascination with the world of Ireland’s criminal gangsters.
The tactic of the Sunday World and its ‘crime editor’ Paul Williams is to mix fact with fiction and to try to link the murderous underworld of criminal gangs with Sinn Féin. The latest ‘crime exclusive’ appeared in the Sunday World of 15 June. Williams reached despicable new depths in his story which was spread over the front page and three inside pages.
There was widespread revulsion at the murder in Dublin last December of a young plumber, Anthony Campbell. Two gunmen came to a house in Finglas and shot dead criminal Martin ‘Marlo’ Hyland. Anthony Campbell was working in the house and when the gunmen were leaving they shot him dead also, apparently in the belief that he might be able to identify them. Williams’ story tried to smear Sinn Féin by association with Hyland and therefore by extension with the underworld gang (believed to be former associates of Hyland) who murdered Anthony Campbell.
Williams claimed Hyland was laundering money “for Sinn Féin and the IRA”. Not a scrap of evidence was produced to sustain this allegation. Williams then went on to repeat a claim he has made over and over again – that criminals involved in the drug trade paid ‘protection money’ to the IRA who then ‘turned a blind eye’ to their drug-dealing. Again, no evidence of this is ever produced but it forms the basis for the bigger lie to come. That lie is that Sinn Féin is funded by the IRA and the IRA is funded by drug-dealing therefore Sinn Féin is funded by drugs. This lie is calculated to cause maximum damage to Sinn Féin among the predominantly working-class readership of the Sunday World, especially in Dublin.
Williams is well aware that Sinn Féin activists stood side by side with communities in the fight against drugs in the 1980s and 1990s and that people in communities throughout Dublin remember this. The ongoing lies and smears are attempts to rewrite history, create fear and suspicion and stifle the growth of the party in the capital.
Wherever possible Williams uses the smear, preferably naming leading Sinn Féin members, particularly Mary Lou McDonald. No direct allegations are made but it is hoped that the appearance of these names in the context of the latest fabricated piece will be enough to make the dirt stick. A more blatant example was in the Sunday World on 12 March 2006 when Williams said in an article on fuel laundering that the money made “is used to directly fund Sinn Féin and the IRA, including the likes of Border TDs Caoimhghín Ó Caoláin and Arthur Morgan”.
While Williams dishes the dirt in tabloid style more ‘respectable’ newspaper columnists take his material as fact and use it in ‘quality’ papers. In the Irish Independent on 19 November 2005 columnist Bruce Arnold described Sinn Féin as a party “whose approach to the practical economics of funding itself has included the use of robbery, violence, extortion, smuggling, money laundering and the control of drug dealing”.
This is echoed across the papers of the Independent group, notably the Evening Herald which has a monopoly position as the only Dublin evening newspaper. Examples in recent years have included the Herald’s front page lie that Sinn Féin members were involved in a racist attack in County Leitrim. Occasionally the anti-republican vitriol leads to farce, as when the Herald ran a front page headline claiming that the IRA was “recruiting 8-year-olds”.
However, the most favoured tactic is that of Williams and his mixing of the current media fixation on violent criminal gangs with the Indo group’s anti-Sinn Féin agenda. The crucial link in all of this is the relationship between Williams and members of the Garda Síochána, particularly the highly politicised Special Branch.
Like most other crime and security correspondents, Williams has a dependent relationship with his Garda sources. Safe in the knowledge that Williams will never compromise the source of his ‘exclusives’, certain Gardaí can feed him their line. He is therefore in no position to question them or to be objective about their motives. Similarly the Gardaí in question have access, through Williams, to very powerful mass media. This can be used to boost their perceived prowess as crime-fighters, satisfy the public appetite for gangland stories and ensure Williams’s position as the country’s “leading crime writer”.
All of this is disastrous for good policing and good journalism. It creates a distorted picture of the reality of crime in Ireland and probably helps fuel the egos of the gangland figures who feature week after week in these stories. It produces many headlines but few actual convictions of violent criminals. Mix in the anti-Sinn Féin agenda and you have a media phenomenon which should receive serious and urgent attention from the likes of RTÉ. Instead, what do we get from RTÉ? Last Sunday Williams made another of his ever more frequent appearances on an RTÉ news programme when he was given the platform of Radio 1’s This Week to repeat his story from that day’s paper. He was not seriously questioned in any way on his false allegations against Sinn Féin.
Clearly the dirty war against Sinn Féin in sections of the media is set to continue. They need to be continuously challenged, in parallel with Sinn Féin’s work in getting its message directly to the people.

A Sinn Féin spokesperson described the story in the Sunday World suggesting that party members in Dublin are involved with criminals as “a fabrication”.
The spokesperson strongly refuted the story and said: “Once again, the Sunday World has produced a story with no evidence to back it up. Sinn Féin has absolutely no link with Marlo Hyland or any other criminal. We expect the highest standards from our members and our public representatives, many of whom have put themselves in the front line in confronting drug dealers and gangland figures in this city.
“Furthermore, claims that individuals named in the article are members of our party are also inaccurate.”