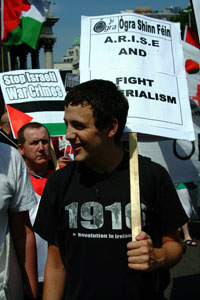 Close to a thousand people marched round Dublin city centre last Saturday 9 June to protest at the 40 year occupation of Palestinian land by the Israeli army.
Human rights groups, trade unions, political parties, including Sinn Féin, and Palestinian solidarity campaigns participated in the march and rally, one of many held around the world on a day which marked the 40th anniversary of the 1967 ‘Six Day War’ during which Israel illegally invaded the West Bank and Gaza Strip.
An Phoblacht
44 Parnell Sq.
Dublin 1
Ireland