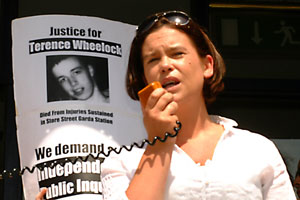 Dublin MEP Mary Lou McDonald pledged Sinn Féin’s continuing support for the Wheelock family in their campaign to seek justice for Terence Wheelock
Speaking outside Store Street Garda Station last Saturday where the Justice for Terence Wheelock Campaign protest took place in Dublin Ms McDonald said:
“It is two years since Terence Wheelock died in controversial circumstances after been found in a cell in Garda custody, and yet his family are still fighting for an Independent Public Inquiry into his death.
“The circumstances surrounding Terence’s death are contentious with many questionable actions taken by the Gardaí on his initial arrest, particularly the treatment of critical forensic evidence such as the immediate renovating of the cell Terence was in and the removal of his clothing from the Mater Hospital by Gardaí.
“Unresolved cases of Garda brutality only serve to deepen the mistrust many communities feel towards those who are supposed to serve and protect them. The questions the Wheelock family seeks answers to can only be addressed through an Independent Public Inquiry.
“Sinn Féin has consistently argued for an amendment to the Criminal Justice Bill which would introduce a statutory requirement for all Garda interrogations relating to serious crimes to be video-taped, and also that the corridors of Garda stations be taped as well where regular beatings occur that result in vulnerable people signing confessions for crimes they didn’t commit”
“The state has a duty of care when people are taken into custody. Every state failure to protect the lives of those in custody, whether in a Garda station or in a prison, must be the subject of an independent investigation, nothing less.”
An Phoblacht
44 Parnell Sq.
Dublin 1
Ireland