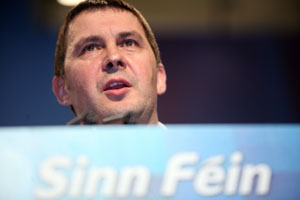 It has been described as a ‘vendetta’ against the Basque pro-independence movement, but the imprisonment of Batasuna’s spokesperson Arnaldo Otegi calls into question, once again, the supposed separation of powers in the modern, Spanish state.
We are now expected to believe that within 48 hours of ETA announcing the end of its ceasefire, the Spanish Special Criminal Court – Audiencia National – independently and without reference to any other power, decided to revisit the issue of bail conditions enjoyed by Otegi and to reverse them, thereby facilitating his arrest and jailing. A remarkable coincidence.
The bail conditions previously enjoyed by Otegi, whilst the ETA ceasefire held, had allowed him to remain active in political life. But then the independent judiciary decided otherwise.
Otegi’s arrest and incarceration in Martutene prison to serve a 15 month sentence, came just hours after Iñaki de Juana, the Basque prisoner who, having served 20 years was then sentenced to an additional 12 years imprisonment for the heinous crime of expressing political opinions, as contained in two opinion pieces published in the Basque paper Gara. His sentence was later reduced to three and a half years, yet was dispatched to a prison near Madrid despite an earlier Spanish government ruling that he was too ill to be kept in prison.
Both arrests have, predictably, generated a massive reaction in the Basque Country, with hundred of citizens taking to the street and demonstrating in support of Otegi and de Juana. Joseba Permach, who spoke at the end of a demonstration in Otegi’s home town of Elgoibar, in the southern Basque province of Gipuzkoa, stated that it is not “by chance” that Otegi was put in prison. Permach said the Zapatero government was utilising repression and criminalisation as a means to “tackle” the Basque question.

Political decision
Permach pointed out that by jailing Otegi, they were in fact jailing the very person who was responsible for framing the conflict resolution proposal presented in the wake of the ETA ceasefire announcement on March 22, 2006, a proposal which they had welcomed with enthusiasm at that time. Otegi was in prison at the time of the announcement.
Permach also criticised the conservative Basque nationalist of the PNV party because of their support for the Socialist government, and whose sole objective he characterised as “to maintain good business and fill up their pockets”.
However, Batasuna’s spokesperson stated that the party would continue to support and focus on their work for resolution of the conflict.
Otegri was arrested on June 8, on his way to a press conference in San Sebastian. Juan Joxe Petrikorena y Pernando Barrena, two members of Batasuna’s ruling executive witnessed the arrest and alerted the waiting media. The arrest was executed without any prior notice from the courts. It is quite obvious, the courts were used to provide legal camouflage for the political decisions of government who were intent on stopping Otegi’s contact with the press.
Then, peaceful resolution of the conflict seemed entirely achieveable, as political space began to open up with Zapatero’s announcement that he was ready to negotiate. However, it now seems certain that the man lacked the political courage necessary to face down a virulent opposition within and without his own party. His failure of nerve at such an historic juncture may well mark the end of his administration and will not be fondly-recalled by future generations.
The failure to aggressively pursue peace and a political resolution to a political problem has led to a resumption of conflict, violence and repression. That is a downward spiral that serves only the agenda of the Spanish right, with the unholy spectre of Spanish fascism lurking in the background.

Congo
The newly elected administration in the Democratic Republic of Congo has announced that a commission is to review at least 60 mining contracts signed in the last decade. DR Congo has vast mineral reserves, including gold, diamonds, 10% of the world’s copper and more than a third of cobalt, which used in mobile phones. But few of its own people have benefited and the wealth has attracted foreign looters. Since March all negotiations on mining contracts have been suspended until the commission has finished its work.

US
President George W Bush cannot order the indefinite military detention of a Qatari man accused of being an al-Qaeda agent, a US appeals court has ruled. Ali Saleh Kahlah al-Marri, the only person being held on US soil without charge has been incarcerated for almost four years as an “enemy combatant”. He was seized three months after the 9/11 terror attacks.  The ruling is seen as a new setback for the Bush administration’s detention/kidnapping policies. Marri, who entered the US legally on 10 September 2001 to study at a US university, was arrested in December that year following investigations into the 9/11 attacks.

Democratic lesson
In Egypt, that democratic stalwart of the middle-east (that’s what the US state department says), the Muslim Brotherhood has accused authorities of harassing its candidates and committing widescale fraud during Monday 11 June voting. This was the first round of elections for the upper chamber of parliament, the Shura council.
Reports say that riot police blocked access to some polling stations and the Brotherhood says many of its supporters were beaten up. The organisation has also pointed out that witnesses testified that at some stations’ ballot boxes were stuffed full before voting opened. Independent election monitors said they were barred from entering polling stations. Reporters at a village outside Cairo say they saw riot police sealing off a polling station and telling people there was no election being held there. Expect no action or outcry.