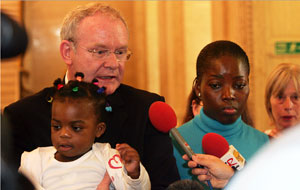 Sinn Féin MP Martin McGuinness, and party colleagues Martina Anderson MLA, spokesperson on human rights and equality and Alex Maskey, South Belfast MLA hosted a private meeting with Lordorice Djountsu and human rights campaigners in Stormont regarding her deportation case and her plight.
Lordorice Djountsu arrived in Belfast in August 2005. Already pregnant, her daughter Imelda was born here in early 2006. She fled from her home in Cameroon following her brutal rape and the murder of her brothers as part of a bitter dispute with a powerful local chief. She was forced to leave her partner behind, who was also attacked and has subsequently disappeared.
Following an unsuccessful claim for asylum, Lordorice and her daughter were picked up by Immigration Officers and were imprisoned in detention for two months awaiting deportation.
Martin McGuinness welcomed the news that Lordorice and her 19-month-old baby Imelda have now returned to her home in South Belfast after a nightmare detention in England. He said Lordorice and her daughter “should now be allowed to live in peace”.
An Phoblacht
44 Parnell Sq.
Dublin 1
Ireland