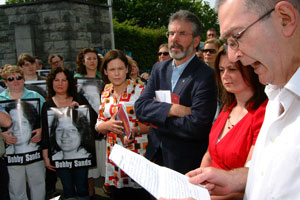 Commemoration at the Garden of Remembrance in Dublin

In a change from the traditional format the annual Bobby Sands Memorial lecture was delivered by Jim Gibney and the recently elected assembly member for West Belfast Jennifer McCann in the Roddy McCorley club in Belfast on Friday night 4 May.
Both Gibney and McCann were close friends and comrades of Bobby Sands so their contributions were personal and political in equal measure.
The crux of the speakers’ contributions, however, was to reflect on the continuity of our struggle from the days of armed struggle to the present where republicans have embraced the peace process and electoral politics as the central plank of struggle to win the freedom of our country.
In a reflective contribution Gibney was at pains to ensure that we as republicans never forget the bravery of the hunger strikers’ families who in the darkest of times and under the most overwhelming pressure from our political enemies stood firm, fulfilling the wishes of their sons not to take them off the hunger strike.
“I’m sure there is not a day goes by that the families don’t think of those days and I am sure the hurt is still as painful as it was then”, said Gibney.
The Sinn Féin veteran also described how Bobby Sands’ historic electoral victory in the Fermanagh and South Tyrone bye-election sent shock waves through the political establishment.
It also set republicans’ minds to thinking that electoral intervention could advance the struggle.
Jennifer McCann first met Bobby Sands as a 16-year-old in the Twinbrook area of West Belfast. She recalled how Bobby was not just, “an IRA Volunteer”, that he was concerned about organising the community to improve people’s lives and the conditions they were living.
“That was because Bobby realised that street politics were as much about republican politics as armed struggle was.”
McCann, who was herself imprisoned, remembered her friend and comrade Mairéad Farrell who was shot dead by the SAS in Gibraltar in 1988. McCann and Farrell were on the protest in Armagh womens’ prison, with Farrell taking part in the Hunger Strike in 1980.
“Mairéad was an inspirational woman”, said McCann “and the one thing about Bobby and Mairéad was that they were willing to take risks and lead from the front. That is what republicanism is all about, taking risks and leading from the front and that is why we are stronger today than we’ve ever been”.

Dublin
Sinn Féin President Gerry Adams addressed a commemoration at the Garden of Remembrance in Dublin on Saturday, 5 May to mark the 26th anniversary of the death of Bobby Sands. Adams said:
“Today 26 years ago Bobby Sands died on Hunger Strike and it is clear that the hunger strikers continue to hold a special place in the hearts of many people. The enduring legacy of the hunger strikers is to be found all around us. Like the Easter Rising 66 years earlier it marked a watershed in modern Irish history. The political growth of Sinn Féin and of Irish republicanism is in no small measure a result of their courage.
“But more importantly, their legacy is to be found in the peace process and the positive transformation it has brought about in Irish society in recent years. That process of change continues.
“Despite the brutal conditions Bobby never lost his faith in people or his determination to look to the future. Twenty-six years after his death Irish republicans face that future with confidence.”

Derry
Meanwhile, also on 5 May up to 70 Derry people, made up of ex-POWs and members of the Derry republican youth group Toirise travelled across the Six Counties, to visit the graves of all ten 1981 Hunger Strikers. At each grave young people from the Toirise group laid an Easter Lily in honour of the dead.
Before leaving Derry City they visited the graves of H Block martyrs Patsy O’Hara and Mickey Devine. They then stopped to pay their respects at the grave of Kevin Lynch in Dungiven before moving on to Bellaghy where cousins Francie Hughes and Tom McElwee are buried side by side.
In the Republican plot in Belfast’s Milltown Cemetery the young people laid lilies on each of the graves of Bobby Sands, Joe McDonnell and Kieran Doherty, who are buried side by side.
Bik McFarlane O/C of the H-Block prisoners during 1981 addressed the crowd and spoke of his great pride in seeing so many young people on the tour.
Afterwards the group were invited back to the Roddy McCorley club for lunch before they journeyed on to Camlough and the burial place of Raymond McCreesh where they met Conor Murphy the newly installed Regional Development  Minister.
The last grave the group visited was that of Martin Hurson who is buried at Galbally in County Tyrone.