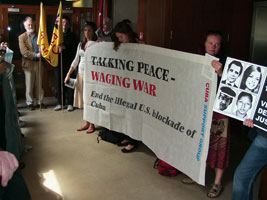 Plans by the man tasked by the US administration with pushing the idea of “regime change’ in Cuba to deliver a low key address to students of Politics at University College Dublin last Monday failed when the event was greeted by demonstrators who responded to calls from Cuban solidarity groups. Caleb McCarry is described by the US administration as its “Transitional Coordinator for Cuba”.
As protestors, including members of Ógra Shinn Féin gathered outside the venue of the meeting to be addressed by McCarry, college authorities hastily moved the location.
Protestors mounted a protest at the new venue and placards were posted next to the speakers podium and facing the US Embassy officials which read “Caleb McCarry Coordinates three key US Government policies: -The Illegal Blockade of Cuba, - The Secret Terrorist War against Cuba, – The Global Propaganda against Cuba. Why is UCD hosting him?”
Protestors prevented McCarry delivering his address, following which the chair adjourned the meeting . Protestors included members of various political  groups in UCD, such as Labour Youth and the Socialist Workers’ Party, as well as groups from outside the college, such as the Free the Miami Five campaign and the Cuban Support group.
Explaining UCD Ógra Shinn Féin’s opposition to the visit a spokesperson for the McDonagh/Farrell Cumann said: “The university failed to publicise the meeting to the majority of the student population.
“The chair of this event called it a ‘debate’, yet no representative to speak on behalf of the Cuban citizens was invited. After a number of abortive attempts to begin the ‘debate, McCarry was escorted from the room by Gardaí and left to the care of US marines.
Meanwhile, Free the Miami Five Ireland has it that Caleb McCarry, was received at the Irish Department of Foreign Affairs by officials of the Irish Government on Monday, 30 April  for talks about the forthcoming proposal tabled by Poland and the Czech Republic to adopt the Bush Plan as official European Union policy under the working title of the “Long and Medium Term Strategy on Cuba”.  The  document contains a classified section which it is claimed deals with illegal and terrorist methods the EU will assist the USA with to bring about the stated US policy of ‘regime change’.
An Phoblacht
44 Parnell Sq.
Dublin 1
Ireland