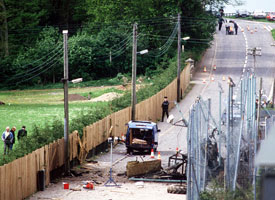 The scene at Loughgall where eight Volunteers were killed

An incident at Loughgall, County Armagh 20 years ago marked the single biggest loss suffered by the IRA since the Tan War. On 8 May 1987, eight volunteers of Óglaigh na hÉireann and one civilian were brutally killed in a planned SAS ambush, as the IRA prepared to attack the RUC barracks at Loughgall.
At around 7.15pm three IRA Volunteers drove a mechanical digger with a 200lb bomb in its bucket into Loughgall village, followed by a van containing several other Volunteers. As the digger drew level with the RUC barracks the driver swung it across the road, smashing through the perimeter fence and jamming it tight against the wall of the building. The firing mechanism to detonate the bomb was set and the Volunteers began to withdraw through the fence towards their comrades in the Toyota van.
At this point, undercover British soldiers, who had been lying in wait around the barracks and in the fields alongside the road, opened fire on the Volunteers from all sides. Two of the Volunteers who had been on the digger attempted to get out of the line of fire by running back in the direction they had come. One was shot and killed about 20 yards from the van and the second was killed about 100 yards away. Some of the Volunteers had deliberately aimed bullet wounds to their heads as well as their bodies being riddled.
There was a huge explosion, which demolished half of the barracks.
British soldiers continued to fire hundreds of rounds into the van while others tried to kill Volunteers who were attempting to break out of the ambush area. Three Volunteers were killed in the van and another three were shot immediately beside the vehicle.
About 100 yards from the scene of the ambush, Anthony Hughes and his brother, Oliver, who were returning home to Caledon, were fired upon by British troops. Anthony Hughes died when he was struck several times in the head by bullets, which had smashed, into his car from every direction. Oliver Hughes was critically injured.


Killing zone
The British fired hundreds of rounds during the carefully laid ambush. By the time the firing ended eight IRA Volunteers and one civilian were dead. The crown forces, under instructions from their political masters, had effectively established a killing zone within which no one was to be left alive. No effort was made to prevent civilians like the Hughes brothers from straying within the area. The Volunteers could have been arrested but it was never the intention of the SAS to take the men alive. Loughgall was sealed off with the help of a British army helicopter carrying a searchlight that scoured the countryside in an effort to find and kill those who had escaped the ambush.
Following the deaths at Loughgall, the IRA paid tribute to their fallen comrades issuing the following statement:
“Eight Volunteers of the East Tyrone Brigade died on active service while launching an attack at Loughgall. Crown forces, who heavily outnumbered the Volunteers, surrounded them and assassinated them. Volunteers who shot their way out of the ambush and escaped saw other Volunteers being shot on the ground after being captured.”
The statement went on to commend the courage of the Volunteers and to extend sympathy to the families of the dead men and to pledge the IRA’s “commitment to pursue the goal of peace and justice for the Irish people”.
Republicans had learned from bitter experience to expect the type of killings that took place at Loughgall. The brutality of the attack failed to deter other IRA Volunteers from engaging in armed resistance against British occupation and oppression. The Loughgall ambush proved, if proof were needed, that the sectarian Six County state could not have been held without the British army.
While the British state through its highly trained, undercover SAS operatives who ambushed and summarily executed the Volunteers, were ultimately responsible for the deaths at Loughgall, the Irish Government at the time facilitated the British agenda. It took 14 hours for the Irish Government to issue its response to the killings. When they finally spoke, representatives of the Fianna Fáil Government condoned the actions of the SAS and asserted, in the face of all the clear evidence to the contrary, that they had no choice but to act as they did.
The eight Volunteers who died in Loughgall on 8 May 1987 were feared by the crown forces but highly respected and protected within their communities. The Loughgall Martyrs did not live to see the free and united Ireland they fought for. It is up to those of us who continue the struggle to ensure the realisation of their goal. Only by doing so will we pay a fitting tribute to their sacrifice.