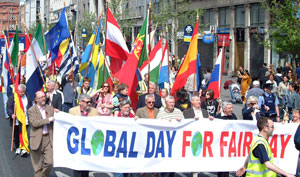 Migrant workers, particularly those from outside the EU, represent the most vulnerable section of the labour force and face a bleak future without the support of the trade union movement, the President of the Dublin Council of Trade Unions, Arthur Hall, told a May Day Rally in Dublin last Sunday. The rally marked the beginning of Dublin’s May Day Festival.
Salome Mbugua, National Director of AkiDwA (the African Women’s Forum), said, “Exploitation of immigrants at work is a reality in Ireland. Some migrant women say they have been made to work for 80 hours and only paid four euros per hour, work odd hours, have their movement restricted and, in some cases, their passport retained by employers.”
A recent AkiDwA report, Black African Women in the Irish labour market, showed that respondents were often over-qualified for their jobs and yet asked to do work other employees objected to. They were denied promotional outlets, pay rises, written contracts, job descriptions or even pay slips. Respondents also reported that grievances about racial discrimination by work colleagues or clients were not taken seriously.
‘Global Day for Fair Pay’ was the theme for the Dublin rally and Hall said that “the trade union movement is nothing if it is not internationalist in its outlook and practice”, but added that Ireland is now “awash with labour agencies who are almost impossible to police”.
Bodies such as FÁS and the ESRI are flagging a more difficult economic environment and much lower job creation rates. “If we want to prevent the sort of racist backlash that deteriorating economic conditions have generated elsewhere, we must be uncompromising in our defence of decent labour standards for all, and carry the war to bad employers, by naming and shaming them, wherever they are. The policy of a global day for fair pay must apply every day of the year, not just on May Day,” he said.
Hall added that workers represented by unions are better off precisely because they are in unions and that this is all the more reason for us to return to the organising mode and the ‘divine mission of discontent’ that Jim Larkin preached when he arrived in Ireland in 1907. “We have to go out again and organise the most vulnerable groups in the workforce, including the 200,000 migrant workers in our midst. Without us, many of them face a bleak future; without them, so do we.”