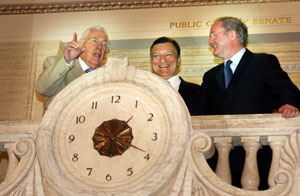 Martin McGuinness described a visit  by European Commission President Jose Manuel Barroso to Stormont on Tuesday as a “massive stamp of approval” for all the goodwill that had been generated in recent weeks.
“We are delighted that President Barroso is with us and he has made a little bit of history in that he is the first president of the European Commission to actually come into this building”, he said, adding: “He does so at a time of great hope for all of our people and I think it is a hope shared by many in Europe and in far distant fields.”
At his meeting with First and Deputy First Ministers Ian Paisley and Martin McGuinness, Barroso also announced plans for over €1 billion in aid to be released to the North between 2007 and 2013.