Demanding Healthcare for All 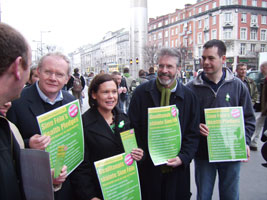 Sinn Féin engaged in a series of actions across the 26 Counties last week as part of its Healthcare for All campaign.
Gerry Adams, Martin McGuinness and Mary Lou McDonald MEP launched Sinn Féin’s Pledge-Card on Healthcare GPO in Dublin last Friday.
Mary Lou McDonald said Sinn Féin was committed to the notion of healthcare as a right as opposed to the current Government’s view of healthcare as a commodity and seeks the establishment of a properly funded public healthcare system free at the point of delivery and on the basis of need alone regardless of the ability to pay.
To see this achieved Sinn Féin is setting out its commitments now.  If in government after the election in the summer Sinn Féin pledges to:

1. End the two-tier health service
2. All public money to be spent in the public health system only
3. Provide 3,000 extra acute hospital beds
4. Reverse cutbacks in local hospital services
5. Regionalise radiotherapy services
6. Provide preventative screening programmes
7. Implement a robust plan to eradicate MRSA
8. Ensure better terms and conditions for nurses
9. A medical card for every child under the age of 18
10. Ring-fence at least 12% of health budget for mental health services

On Tuesday Mary Lou McDonald, speaking as dozens of Sinn Féin protests took place across the country against the government’s hospital co-location policy, said the Fianna Fáil/PD Government was trying to reinforce the two-tier system. “Sinn Féin is totally opposed to the government’s plan to allocate land at public hospital sites to private for profit hospitals.  And we are totally opposed to public money, in the form of massive tax breaks, going towards the privatisation of our health services.
“Today I want to put the property developers tendering for these private for profit hospitals on notice that if Sinn Féin is in government following the General Election we will not allow this policy to be implemented.
“Every cent of Government health funding should be invested in the public system where there is access on the basis of medical need alone”, she said.
Activities  in Sinn Féin’s Healthcare for All campaign including leaflet distribution, white line pickets, protests and public meetings took place at various venues including Kerry, Cork, Castlebar, Letterkenny, Monaghan Town, Dundalk, Navan, Kells, Limerick, Wexford, Castlepollard and Delvin in Meath and in various locations around Dublin city.
At a protest in Monaghan Town last Saturday Sinn Féin Health spokesperson Caoimhghín Ó Caoláin TD set out the healthcare priorities the party wants to see delivered in government in relation to acute hospitals, MRSA, primary care, mental health and drug and alcohol abuse.
Speaking at the Monaghan protest Ó Caoláin said:
“With our A&E services still in crisis, with nurses beginning a work to rule and with services at local hospitals such as Monaghan being downgraded, this Government’s so-called solution is privatisation.  We are demanding unequivocally that all public money should be spent in the public system only with equal access for all based on need alone”, he said.