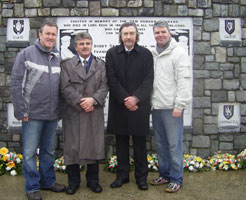 There was a large attendance at the recent commemoration for IRA Volunteer Keith Rodgers who was murdered on the 12 March 2003.
Speaking on the fourth anniversary of the Rodgers death Sinn Féin TD Arthur Morgan told those present, who included the Rodgers Family that the Keith’s shocking death was still very much in people’s memories.
“Keith was respected and admired not only by his comrades but by the community here where he came from” said Morgan.
The Louth TD commended the local community for their continued care and support for the Rodgers family as they endeavoured to cope with the tragic loss of Keith. He particularly praised to the local Rodgers/Martin Sinn Féin Cumann for their commitment to the republican cause and ideals that were so dear to Keith.
Morgan also extended a welcome to successful Newry/Armagh Assembly election candidates Conor Murphy MP, Mickey Brady and Cathal Boylan. He urged all to stay united and carry the forward the commitment and confidence recently shown in the Six Counties into Sinn Féin’s battle in the 26 county general election.
An Phoblacht
44 Parnell Sq.
Dublin 1
Ireland