Call for Inquiry into Belturbet bombing 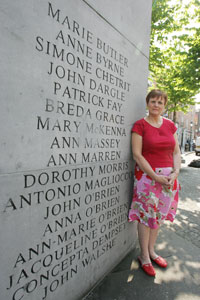 Margaret Urwin at the Memorial of the 1974 bombings in Dublin

The families of two children killed in a unionist paramilitary car bomb attack in County Cavan are calling for an inquiry into the Garda handling of the original investigation.
Fourteen-year-old Geraldine O’Reilly and 15-year-old Paddy Stanley were killed by the UVF in December 1972. Both teenagers died when a 100 lb car bomb, one of three planted by the UVF, exploded without warning outside a post office in Belturbert, County Cavan.
Twelve other people were injured including three seriously injured. On the same evening another loyalist bomb exploded at Clones, County Monaghan injuring several people and a third in Pettigo, on the Donegal-Fermanagh border.
Last week Margaret Urwin of the Justice for the Forgotten group which represents victims of loyalist and British state violence in the 26 Counties called on Bertie Ahern to launch an official inquiry into the killings in Belturbert and to establish a commission to look into Garda investigations into a number of bombings which took place in the 26b Counties in the 197’s.
A joint Oireachtas committee has already recommended investigations into the deaths of Dublin bus driver and conductor George Bradshaw and Thomas Duffy in December 1972.
Speaking after the unveiling of a memorial to remember the victims of the Belturbet, Joe Stanley’s father Patrick said those responsible for the killings were known in Cavan. “Everyone seems to know their names but the gardai don’t want to know”, said Patrick.