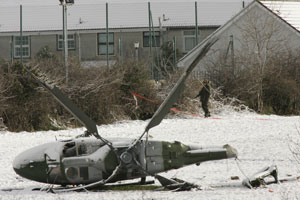 Sinn Féin Newry/Armagh MP Conor Murphy has called for an end to British army helicopter flights after Crossmaglen residents narrowly escaped being caught up in a helicopter crash close to their homes. The accident happened last Sunday evening when a British army Lynx helicopter developed mechanical problems during bad weather close to homes in the South Armagh village.
The aircraft crash-landed in a playing field, just yards from a row of houses. The pilot narrowly missed rooftops as the craft lost altitude and pitched onto its side. The helicopter was one of a number flying in and out of a nearby British army fortification which is scheduled to be closed at the end of the month.
“The bad weather forced the cancellation of flights and ferries across Ireland and Britain, yet the British army thinks it’s okay to fly low over Crossmaglen,” said the MP.
“This crash could have been much worse and residents are relieved that they were spared the potential carnage. These flights clearly pose a threat to local people and should be stopped”, he said.
Murphy expressed disappointment that there had been incidents later on.
“The people that have been most harmed through these incidents are the local community. It is unfortunate that the real focus here – the fact that a military helicopter narrowly missed crashing into homes has now been overshadowed.
“People from the local community and local elected representatives were active on the ground encouraging young people to move away from the area. When I left just after 10pm the area was quiet as the majority of young people had listened to parents and ourselves”, he said.