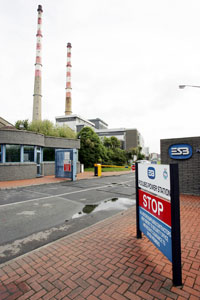 Power in the Unions — the fight to save ESB

The ESB is a profitable state company yet its future is uncertain.  The Irish Government has announced long-expected plans to break up the ESB and effectively set it up for privatisation.
The implications of the government proceeding with its plans will be far reaching.  The consequences for both the economy and consumers should not be underestimated. The spectre of a repeat of the Eircom debacle looms large.
The Government will not be allowed to proceed with its plans unopposed.  The ESB group of Unions have made known their opposition.  Sinn Féin is committed to mobilise in opposition to these proposed developments.   The people who are bearing the brunt of the consequences of the privatisation of Eircom – those in rural Ireland in particular who cannot access broadband and those who have experienced lengthy waiting lists to get phones connected and repaired – will not accept this.
Last week the ATGWU launched a briefing paper on the Irish electricity market which debunks many of the myths advanced by those pushing privatisation. It is well worth reading and can be accessed online at www.generatingunity.com.
Brendan Ogle has committed on behalf of the ATGWU to fight to protect the company in the public interest.  In Ogle, the ATGWU has a passionate advocate for its members. The unions are rightly furious at attempts to scapegoat the workforce and link recent ESB price hikes to labour costs.
The ATGWU report highlights the fact that in the year 2000 the state had amongst the lowest  electricity prices in Europe.  After seven years of government policy we now have the highest.  It points out, as Sinn Féin did in its Pre-Budget submission 2007 (available at www.sinnfein.ie) that the main cause of high prices is the government’s policy, implemented on its behalf by the Regulator, to artificially increase electricity prices to entice private companies to enter the market.
Prices in real terms have risen by more than twice the increase in ESB operating costs.  There is no relationship between the cost of producing electricity and the price at which it is sold to consumers.  These artificial price hikes are hurting business and exasperating the plight of the many thousands of people who continue to suffer from fuel poverty. The attempts to give the impression that these price increases are somehow linked to labour costs are the first volley in a battle to undermine public support for the unions and convince us that high prices are a consequence of the ESB’s status as a semi-state.
The ATGWU report argues that the government admitted failure by commissioning the Deloitte report on the electricity market, published last year. While the Deloitte report, at a cost of €1.1million, referred to ‘price distorting mechanisms’ it refused to investigate and made no recommendation about  how these distortions could be removed.
In the year 2000 labour costs in a fully privatised electricity sector in Britain were more than 10% higher than in the predominantly public enterprise sector in the 26 Counties. In the last reported year – 2005 – the wage bill actually fell by nearly 6%.
Tackling the claim by the government that it is concerned with the dominance of the ESB in the marketplace, the union points out that under the all-Ireland energy market, coming into force from 1 November, the ESB’s share of this market would be just over 40%.
The report points to three additional reasons why electricity prices are higher than they should be–- the failure to finance capital investment; the imposition of the Public Service Obligation levy and the taking by the Government of over a quarter  of a billion Euros in dividends from the ESB.   The ATGWU is also highly critical of the Government for failing to put in place a strategy to transform electricity generation with renewable technologies.
It proposes “three simple steps to reduce electricity prices and increase investment in renewable technologies”. These are the abolition of the Public Service Obligation Levy with resources for supporting native and renewable technologies being raised through a royalty tax on offshore exploration; waiving the dividend to the shareholder (i.e. the government) and funding future major infrastructural investment in the grid from the capital budget and any new National Development Plan.
Those advocating the break up and privatisation of the ESB have all the forces of the establishment amassed at their side.  In the coming weeks and months the unions will come under a severe assault for daring the be political – for daring to act in the public interest.  But unions are and should be political and must be commended when they take action in the public interest. All unions must be actively supported in their efforts to protect the ESB. Sinn Féin will be campaigning to prevent the ESB privatisation of the ESB.  The party will be standing side by side with the trade unions in the battle that lies ahead.