Peace Process : Only new money for Executive is from Irish Government 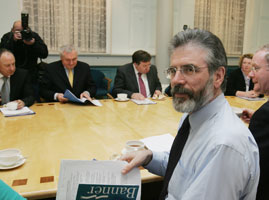 British yet to come up with financial package

Following a meeting on Tuesday between a senior Sinn Féin delegation led by party President Gerry Adams and the Taoiseach Bertie Ahern who was accompanied by the Minister for Finance Brian Cowan and the Minister for Foreign Affairs Dermot Ahern, Sinn Féin Assembly member Mitchel McLaughlin acknowledged that as things currently stand the only new money being put in front of an incoming Executive is that being provided by the Irish Government.
“It is of increasing concern to Sinn Féin that the British Chancellor Gordon Brown does not seem to be properly engaged on the issue of a substantial and significant peace dividend to be used by any incoming Executive”, McLaughlin said.
“As things currently stand the only new money on the table for a future Executive is that being provided by the Irish Government. At this evening’s meeting we acknowledged this fact and expressed our view that the British government have yet to come up with the necessary financial package to tackle the legacy of infrastructural under investment in areas like water”, he said.
“This reality poses a very significant challenge to the successful transition to a power sharing executive which can effectively deal with the very many difficulties which we face.
“Sinn Féin remains engaged with the British Government and the British Treasury on this issue and we will express these very real concerns to Gordon Brown when we meet on Thursday”, said McLaughlin.

DUP have days to decide

Speaking before Tuesday’s meeting at government buildings in Dublin, Gerry Adams pointed out that there was less than one week for the DUP to decide whether or not they are going to share power with the other parties on the basis of equality.
“I very much hope that the DUP decide to join with us in taking responsibility for tackling the range of social and economic challenges which will face any new Executive”, he said.
“In the course of recent times we have been involved in intensive discussions with the British Government and the British Treasury on the detail of a substantial and significant Peace Dividend which any new Executive will require. These talks will continue later this week in London with the British Chancellor Gordon Brown”, Adams said.
“This evening the Minister for Finance Brian Cowen will accompany the Taoiseach to our meeting. Clearly the Irish government contribution to a Peace Dividend is a crucial element of the work we are currently engaged in. We have previously discussed this with the Irish Government and some of the detail of their contribution has been spelt out in the National Development Plan. The Irish Government also have a role in ensuring that the British government step up to the mark particularly in relation to the legacy left by decades of under funding in essential public services”, he said.
“There is considerable optimism that this time we will secure the elusive breakthrough. However if the DUP fail to sign on for power sharing then the two governments have to press ahead with their joint partnership arrangements.”

Meanwhile, also on Tuesday, Sinn Féin Group Leader in the Six County assembly, Upper Bann MLA John O’Dowd speaking after the Ministerial Code of Conduct and the new Assembly Standing Orders were debated at Stormont has said that he is confident that Sinn Féin defended the core principles of the Good Friday Agreement throughout the recent negotiations with the British and Irish governments.
“In these negotiations Sinn Féin had two objectives; to defend the core principles of the Good Friday Agreement and to bring the DUP into a power sharing Executive built upon equality”, O’Dowd said.
“Sinn Féin has defended the core of the agreement particularly in relation to the authority of ministers and full engagement with the all-Ireland strands of the Good Friday Agreement.
“The only question that remains is whether the DUP are prepared at this point to join the rest of us in the power sharing and all Ireland arrangements. I hope they do.
“Sinn Féin opposed the clause in Standing Orders today relating to the IMC and its undemocratic role”, he said.