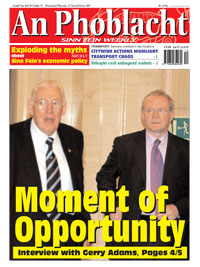 The opportunity for progress is now

In an extensive interview in this weeks An Phoblacht Sinn Féin President Gerry Adams MP speaks of his hopes for power sharing next week; the attitude of republicans to policing and law and order; the efforts to engage with other republican groups, and the need for a peace dividend.

How hopeful are you that next Monday will see the restoration of the political institutions?
I am optimistic and hopeful that this time we will achieve the breakthrough that has eluded all of us for so long.
The election results clearly show an overwhelming demand for the institutions to be restored. Voters had the opportunity to chose between British Direct Rule ministers and local politicians in a power sharing Executive and they emphatically opted for the latter.

All of those candidates and groups which were anti-Agreement were trounced. The only question that remains – indeed the only question of any substance for the last three years – is when will the DUP say Yes?
The opportunity to secure additional funding from the British government is now; our collective ability to kick start a new phase of local accountable government will never be better; and there is a definite public mood for progress.
Republicans have taken significant initiatives and engaged in long and difficult negotiations with the British government to create the current conditions for progress.
In addition, the restoration of the political institutions, with unionists under the leadership of Ian Paisley entering into genuinely inclusive structures, would represent an enormous step forward in the essential process of national reconciliation. And it would provide a powerful example of peacemaking and reconciliation to the international community and to others seeking to find a way out of conflict.

There are still those on the unionist side who question republican intentions; who continue to raise questions about the IRA or Sinn Féin’s commitment to policing. How do you reassure them?
For some it may be impossible to provide reassurance. The reality is that all of us are participating in a process of fundamental change, unprecedented in Anglo-Irish history. This is enormously challenging for all of us but especially for those who want to hold to the past. That is not going to happen. All of that is gone.
But we do have a responsibility to spell out clearly what we want and how we intend moving forward to achieving it. Sinn Féin has no hidden agenda. We are not trying to con, or dupe or mislead anyone, especially unionists.
Sinn Féin is an Irish republican party. Our goal is an end to Partition and the creation of a united, independent Ireland in which all of the people live together in mutual respect and on the basis of equality.
We know that we have a job of work to do to convince unionists  – even a section of unionists – that this is the best future for them and the rest of the people of this island, and we are up to that challenge.
The fact is that the war is over. The peace process has created for the first time ever in our long and troubled history, a peaceful and democratic option for achieving a united Ireland.
The IRA decision in July 2005 to formally end its armed campaign and the decision to put arms beyond use, has presented an unparalleled challenge and opportunity for every nationalist and republican.
It is one which we in Sinn Féin have proactively sought to build on. The goal of a united Ireland remains absolute. It can now and will be achieved by purely peaceful, democratic and political means.
There is a peaceful way to achieve political change, equality, justice and ultimately Irish freedom. There is no reason or excuse for armed actions.
The IRA has removed itself from the picture. It is committed to advancing republican and democratic objectives, including a united Ireland, and all its Volunteers have been instructed to assist the development of purely political and democratic programmes through exclusively peaceful means.

What of policing? Is there ambivalence in the Sinn Féin attitude to the PSNI and crime?
All Sinn Féin ministers will endorse the pledge of office on 26 March including the commitment to fully endorse the PSNI. There is nothing conditional in that.
The Ard Fheis motion commits Sinn Féin to fully support the PSNI and the criminal justice system.
Sinn Féin is delivering on policing: we have been delivering on what we promised and we will continue to do so. We have been actively giving support to the police by encouraging those with information on crimes to go to the PSNI – that has been happening since the Ard Fheis.
The failure of the police to behave in a fair and non-partisan way in the past constituted political policing.
The Ard Fheis motion commits Sinn Féin to holding the police to account on the basis of fairness, impartiality and objectivity. That means legitimate criticism and challenge if particular actions by the police appear not to live up to these expectations, as unionist politicians have asserted in the past.
Our expectations are shared by citizens generally. They are for policing as a public service. That is the responsibility of politicians and the Policing Board – to hold the police to account. That is what the leadership of the PSNI expects from us.
Sinn Féin will participate fully in policing structures, including the Policing Board, once reconstituted and the DPPs. I will propose that to the Ard Chomhairle as soon as the institutions are re-established. This becomes possible in the context of the restoration of the political institutions and the Ard Chomhairle’s satisfaction that policing and justice powers will be transferred away from London.
The decision by the special Ard Fheis is only the start of a process of ensuring that the accountability mechanisms for policing and justice that are in place are used to their fullest potential.
We also have a lot of work to do in co-operation with the families of those who continue to seek the truth on collusion, and state terrorism or who campaign for an end to plastic bullets.

Before the election you offered to meet other republican groups, including armed groups. Has this happened?
Not so far. But I continue to seek such meetings. It is important that there is a dialogue between us. I want to explain to them our strategy, what we are trying to achieve and why we believe their actions are counter-productive.
In the recent Assembly elections those republicans opposed to Sinn Féin stood candidates. I welcomed this political intervention. Everyone who goes to the people for endorsement of their views is to be commended. These other republicans put their position to the electorate and it was rejected. But that is not to say that their views should be ignored. On the contrary, they should be listened to.
So, in this context I believe it would be important that Sinn Féin meet with these organisations to brief them in detail on current developments and impress upon them our view that the current Sinn Féin strategy is the best way forward for our community and for the wider republican struggle.

How important is the peace dividend, the economic package, from the British government?
Sinn Féin was the first party to raise the importance of a peace dividend, an economic package, from the British and Irish governments. It has been a priority in all of our discussions with both governments. Of course, the British government will always be reluctant to give as much as it should.  But at the same time I do think that this British Government, know, they can sense the growing mood of optimism, that the current situation could see a real breakthrough after all the conflict and the other false dawns.
In my conversations with the British Chancellor Gordon Brown he certainly gave the impression that he realises that there now exists a historic opportunity to make significant progress and that he has a role to play in ensuring that is properly resourced.
If the Executive is in place, as expected on 26 March, it is essential that it has the resources to fulfil its obligations.
It would be disastrous if the incoming administration was saddled with a legacy, on top of all the other problems, arising from the failure of successive British governments to fund public services here.
Sinn Féin is particularly arguing for relief from the additional water charges.
But this needs to be part of an overall economic package. Political parties, particularly those parties which will form the Executive, need to be united on this issue. It will be extremely difficult to get the British government to pick up the tab on these matters after the Executive is in place.
The time to do it is now, before 26 March.
However, this is an impossible task unless it is very clear that there will be functioning political institutions as set out in the Good Friday Agreement and at St. Andrews.
Thursday’s meeting with the British government is very important but so too is the meeting we held with the Taoiseach Bertie Ahern and the Minister for Finance Brian Cowan on Tuesday evening in Dublin.
Clearly the Irish government’s contribution to a peace dividend is a crucial element of the work we are currently engaged in.
Sinn Féin has previously discussed this with the Irish Government and some of the detail of their contribution has been spelt out in the National Development Plan.
The Irish government also have a role in ensuring that the British government step up to the mark particularly in relation to the legacy left by decades of under funding in essential public services.