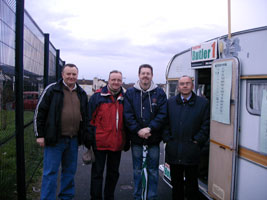 It is an election tale of an elated candidate, a grumpy one, a caravan and a friendly mechanic.
The last place you would expect to find a candidate and his election agent at 8am on polling day is inside a derelict quarry on the side of a mountain, digging a caravan out from overgrown weeds and cursing all and sundry.
But that is where Sinn Féin’s Paul Butler and I were, in the company of a friendly mechanic with a five pound hammer, a bolt cutter and a magic potion in an aerosol spray. He used the hammer with gusto to loosen up frozen bolts and nuts, and sprayed the aerosol on liberally to release them. Gently, over the period of an hour, we prised the caravan free from its two-year-long anchor.
As the saga unfolded, I dutifully reported it by mobile phone to Lagan Valley’s DoE while we tentatively hooked the caravan to Paul’s car – the only one in the constituency with a tow-bar!
With car and caravan hooked up, the downhill journey was at a snail’s pace. On arrival outside the polling station, and feeling good with our Tally Lodge on wheels, we were met with laughter and derision by the election team and sent off to a carwash for a makeover.
One hour later, displaying a fine gloss (a mixture of water, suds and spring sunshine), the rescued caravan settled down to a long day in the company of republicans for the first time since the election of 2005.
Was it a bad omen, I wondered, as I watched the caravan being decorated in Sinn Féin regalia?
Even if it was, Paul and I encountered more good omens as we travelled across the constituency with a loud hailer. Everywhere we went, especially in places least expected, well-wishers tooted their horns and shouted good-luck greetings. Outside Glenavy village, a group of yellow-hatted builders waved approval from a rooftop; on the main street a truck driver halted and waved.
But were they Sinn Féin voters in the constituency, Paul and I debated?
On arrival back at the now-handsome caravan at 5pm, midway through the day, I was greeted with the news that the computer had crashed. Weeks of carefully-laid plans for methodically sweeping and recording the vote as it came out were threatened.
Technology was quickly replaced by the DoE reverting to brain power and a general door-knocking exercise.
By close of poll the seamless shift had paid off, as queues of cars and people backed up from the polling station.
As we readied the caravan for its late night journey back to its halting site, the amazing number-crunchers lifted all our spirits. The boxes from Lagmore, the heartbeat of the nationalist constituency, showed an 82% turnout. On those figures, a reliable stalwart predicted that the urban end of the constituency had delivered. But would it be matched by the voters in the rural end - the people whose lives were dominated by unionist bigotry and discrimination and hitherto thought the SDLP safer to rely on than Sinn Féin?
These thoughts raced through our minds in the darkness of night as Paul, his partner Caroline and I parted company with the caravan, probably for the last time.
The first sign that the earth had moved in Lagan Valley arrived the next morning with Dominic, a Sinn Féin activist, shortly after 11am at the election count in Lisburn. His counting sheet showed 10, 10, 10, 9, 9, 8, 10, 10, 10, 10 – a 96% turnout for Sinn Féin in Lagmore.
For the first time, I dared to think the unthinkable: Butler could do it.
Now I knew why the DUP team and Jeffrey Donaldson had been grumpy all morning.
Their counters were telling them what ours were telling me: Sinn Féin were taking a seat in Lagan Valley and bringing an end to unionist domination in yet another part of the North.
At 2.55pm my notebook records: “The votes just keep coming, pile after pile after pile.”
They started in their tens, then their hundreds. They were boxed in bundles of a thousand. One thousand became two, then three, then incredibly four. We had crossed over Chris Donnelly’s magic number, and we never stopped until we had marked up 5,098 first preference votes – an amazing result.
1,200 second preferences from the SDLP secured Sinn Féin the second seat, next to DUP MP Jeffrey Donaldson’s 9,800.
A wonderful end to another day.
The caravan had turned out to be a good omen after all.