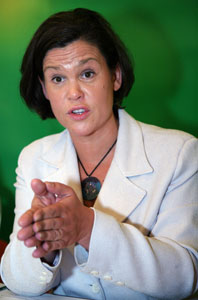 Call for publication of bombings report

Dublin Sinn Féin MEP Mary Lou McDonald has called on the Taoiseach to publish the McEntee report into the Dublin/Monaghan Bombings as early as possible.
McDonald also called for a full debate on the issue of collusion between state forces and unionist paramilitaries to take place before the Dáil rises for elections in the summer.
Taoiseach Bertie Ahern received the findings of barrister Patrick McEntee’s inquiry into the Garda investigation of the Dublin and Monaghan bombings on Tuesday.
McEntee was asked to conduct an examination after Justice Henry Barron’s initial inquiry into the 1974 attacks raised serious questions about the original Garda investigation.
Justice Barron said the Gardaí failed to follow up a number leads and appeared to close down their investigation prematurely.
He also raised concerns about files that had gone missing from both the Garda archives and the 26 County Department of Justice.
Thirty three people were killed when unionist paramilitaries set off three car bombs in Dublin and one in Monaghan in May 1974.
It has long been believed that British state forces assisted or indeed directed those who carried out the bombings.
The Justice for the Forgotten group that campaigns on behalf of the victims and their families says it hopes McEntee’s report will be published in the coming weeks.
“The Taoiseach now has the long-awaited report on the Dublin/Monaghan Bombings from Paddy McEntee in his hands. He should waste no time in getting the document published and proceeding with the promised Dáil debate on collusion. This debate must be full and open and focussed on the whole issue of collusion and not restricted to the Dublin Monaghan Bombings alone”, Mary Lou McDonald said on Tuesday.
“The debate must not be guillotined as previous debates on collusion have been and to ensure this my Sinn Féin colleagues in Leinster House will call for a suspension of normal Dáil business to allow for a full debate as soon as the report is published”, she said.

Last week Sinn Féin published a Dáil motion on collusion that was drafted in consultation with groups such as The Pat Finucane Centre, The Justice for Eddie Fullerton Campaign, Justice for the Forgotten and Relatives for Justice. The party feels this motion should form the basis for the debate in Leinster House as it would ensure that follow up actions take place.
The Sinn Féin Dáil motion calls on the Government to demand an inter-governmental conference with the British Government specifically dealing with the issue of collusion and truth recovery and calls for the establishment of full, public, independent, judicial inquiries into murders in this state where collusion is reasonably suspected.
Publishing the motion last week, Sinn Féin Justice spokesperson Aengus Ó Snodaigh TD said it came on the back of a very successful and well attended conference on collusion organised by Sinn Féin in Dublin.
“Our motion recognises the failure of the Government to establish full, independent, public judicial inquiries into all those killings in this state where collusion is reasonably suspected, recognises that the Tribunals of Inquiry Bill 2005, like the British Inquiries Act 2005, may serve to limit the potential of future tribunals to uncover the truth and therefore calls on the government to withdraw this Bill and amend it accordingly, and our motion also calls on the Government to demand an inter-governmental summit with the British Government dealing specifically with the issue of collusion and truth recovery.
“The British Government, through its surrogates in Ireland, has been responsible for the murder of citizens in this state. There is an onus on this Dáil to have a full and open debate on this issue and for the Taoiseach to demand co-operation from the British Prime Minister in collusion inquiries”, he said.