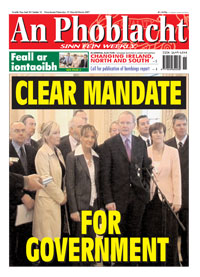 Speaking on Tuesday after the newly elected Assembly members registered in the chamber at Stormont, Sinn Féin nominee for the post of Deputy First Minister Martin McGuinness said that the next step had to be getting the institutions fully functioning.
“If today’s registration of members is to mean anything then it has to be followed on 26 March with the Assembly, Executive and all-Ireland bodies going live. Achieving this remains our objective in the short time that remains to get the business done”, McGuinness said.
“We remain positive that we can achieve a functioning Executive and Assembly in the timeframe demanded by the two governments at St. Andrews. All of the parties with the exception of the DUP stand ready to enter government now”, he said.
“It is my hope that in the course of the next two weeks Ian Paisley commits himself and his party to sharing power with the rest of us on the basis of equality. If he chooses to do this, then we can sit down and begin to tackle head-on issues like water charges, rate increases and ongoing cuts in health and education. This is what the people voted for last week in overwhelming numbers”, said McGuinness.
Speaking last Friday, 9 March following the elections, McGuinness said that the electorate had delivered a clear mandate for a power-sharing executive.
“I would like to thank the people who came out in massive numbers and once again placed their trust in Sinn Féin. It is clear across the political spectrum that the people have delivered a clear mandate for progress and for the establishment of a fully functioning Assembly, Executive and all-Ireland bodies”, McGuinness said.

Eager to get down to business

“Sinn Féin are up for that challenge. We are eager to get down to the business of delivering for all of the people. We are eager to get down to the business of tackling the very many social and economic issues which came up at he doorsteps, be it water charges, rates increases or health and education cuts.
“People should make no mistake about it, Sinn Féin are ready for government and there is no reason why this should not happen by 26 March. So we will approach the coming weeks positively and with the intention of securing power sharing government in the North and agreement with the British and Irish governments on a substantial peace dividend to allow the new executive to deliver real and tangible change”, the Sinn Féin Chief Negotiator said.
Sinn Féin President Gerry Adams travelled to London for talks with the British Prime Minister Tony Blair on Wednesday, while Martin McGuinness travelled to the United States on Wednesday for a series of engagements with Irish American organisations and senior US Congress members including Representative Richard Neal and Senators Kennedy and Clinton. The Sinn Féin Chief Negotiator will update them on progress in the work to secure the return of the power sharing institutions by 26 March.
Prior to meeting Tony Blair on Wednesday, Gerry Adams held talks with British Chancellor of the Exchequer Gordon Brown which concentrated on the need for a substantial Peace dividend to be provided for any new Executive to effectively tackle issues like Water Charges.
A substantial peace dividend is a priority for Sinn Féin in the run up to 26 March.