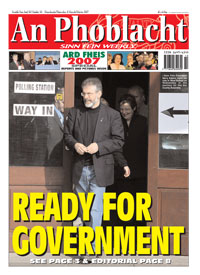 The process of change continues

As An Phoblacht went to print on Wednesday afternoon, with voters in the North going to the polls in the Assembly election, reports from Sinn Féin canvassers across the Six Counties were very positive. Turnout is high in nationalist and republican areas, despite a repetitive media message in recent weeks of unprecedented voter apathy.
With 37 Sinn Féin candidates standing in 18 constituencies, Sinn féin has received a very warm response on the doorsteps across the North and it is seems clear that republican partyu will, once again, increase its mandate and representation.
On Wednesday morning, Sinn Féin President Gerry Adams was joined by fellow West Belfast candidates Paul Maskey and Sue Ramsey along with party MEP Bairbre deBrún, to cast their votes at St. Teresa’s School on the Glen Road in Belfast.
Speaking after voting Adams said:
“This was not the flat election campaign portrayed by the media. I have been in constituencies across the six counties and people are up for this election. There is also significant international interest in the poll as can be seen from the amount of foreign correspondents present here today.
“Having travelled extensively over the past number of weeks I have to say that I am confident that the Sinn Féin vote is highly motivated and that it will come out in large numbers throughout the course of the day. This is a hugely important election and will decide the direction of politics here in the years to come.
“We are an all-Ireland party and on Friday at the conclusion of the count in Belfast I will travel to Dublin to formally launch our general election campaign in the 26 counties. This is a time of tremendous opportunity for people on this island. A strong Sinn Féin vote today will ensure that the process of change continues and that a strong Sinn Féin team is elected to the Assembly and the Executive.”