Focus on 'The Cause of Labour' 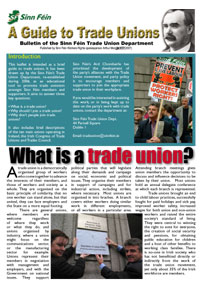 This weekend’s Sinn Féin Ard Fheis is to have a particular focus on workers’ rights and trade union issues. For the first time, two prominent guest trade unionists have been invited to address delegates. Jack O’Connor, General President of SIPTU, and Patricia McKeown, Regional Secretary of Unison, will speak at the Friday evening session on the question of the ‘continued relevance of trade union activism in Ireland today’.
Sinn Féin has prioritised workers’ rights over the past 18 months. During that period, party members were particularly active in relation to the Irish Ferries campaign, the campaign to re-instate sacked shop steward Joanne Delaney and the campaign to stop the privatisation of Aer Lingus.
A focus has been put on engagement with the trade union movement and the promotion of trade union activism amongst Sinn Féin members and supporters.  In the summer of 2006, the Ard Chomhairle re-established the Trade Union Department to lead this work.
In addition to the addresses by O’Connor and McKeown, the Ard Fheis will see the launch of a ‘Brief Guide to Trade Unions’. This four-page leaflet is designed to answer common questions such as why you should join a union, as well as giving an outline of the major unions in Ireland. Each delegate will receive a copy of the guide in their Ard Fheis pack and in coming weeks it is hoped to distribute it to Sinn Féin members across Ireland.
Literature and membership application forms for the major unions will be available at a Trade Union Department stall. The Department is inviting all those with an interest in trade unionism, and who would like to tie in with its work, to visit the stall on Friday and Saturday.