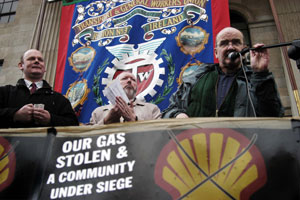 A Shell to Sea national demonstration, in Dublin city centre last Saturday, highlighted the continued and widespread opposition to the construction of the controversial Corrib gas pipeline and terminal in North Mayo.
The demonstration was supported by the Dublin Council of Trade Unions, Waterford Council of Trade Unions and the Dublin Busworkers branch of the National Bus and rail Union.
Speakers at a rally outside the GPO included Mícheál Ó Seighin of the Rossport 5 and Michael O’Reilly of the Amalgamated Transport and genral Workers’ Union (ATGWU).
Adrerssing the rally, Sinn Féin Dublin City Councillor and Dáil candidate for Dublin South East, Daithí Doolan called for an inquiry into the Corrib gas deal.
“This Corrib deal with shell will have to be the subject of public inquiries. Down through the years there have been ministers who represented the government who were either totally inept or deliberately misleading. There was a lack of consultation with the public and other elected representatives and the terms that were agreed were a national scandal’, Doolan said.
“Revenue generated from the gas should be used to fund local government and other public services such as our Health service and our schools. Instead we have a situation where the people of Norway, through Statoil, will have more funding for public services from this deal while we are forced to pay a premium rate for our own gas. I fully support the people of Rossport in their struggle and I urge the government to renegotiate this deal and to set up an inquiry to restore public confidence and get to the bottom of this farcical deal”, he said.